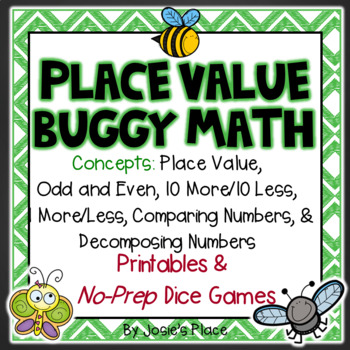 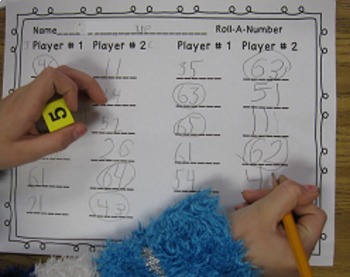 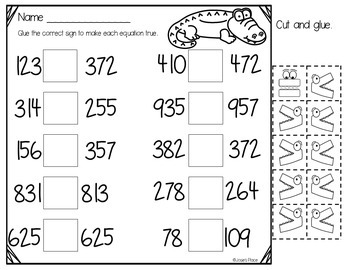 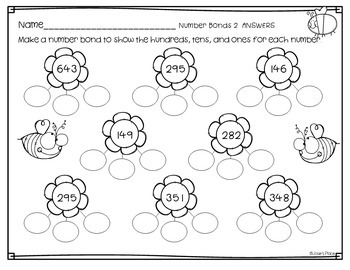 Some worksheet are differentiated with two and three digit numbers to meet the needs of all learners in your class.

Some worksheets also have a choose your own number option for more practice.

For Greater Than/Less Than/Equal To Concept:

•4 Anchor Charts for greater than, less than and equal to.

•2 (4 pages in all) Place Value Dice Games which include:

•Tens and Ones Work Mat

•Hundreds, Tens Ones Work Mat (to support child who need it for the printables)

•1 Base Ten printables for showing numbers in picture form

•3 printables for 10 more/less and 1 more/ less using one number.

•1 Choose your own number option for 10 more/less and 1 more/ less using one number.

Question Cards are varied for breaking down and putting together numbers, identifying numbers with base ten blocks, recognizing numbers in word form and more. These are the only items that need to be cut up)

•1 Identifying Ones, Tens and Hundreds Color by Code printable

For Even and Odd Numbers:

* Some answer keys are included

If you choose this product, please leave feedback.

Please visit my other math products:

Organization of math manipulatives –all grades:

Place Value, Greater/Less Than and more:

Buggy Math for printables and no prep dice games to learn place value, odd/even,greater than and less than and more! Gr. 1-3

HOLIDAY MATH (these include a thematic approach but includes many math activities):

Log in
to see state-specific standards (only available in the US).
CCSS2.OA.C.3
Determine whether a group of objects (up to 20) has an odd or even number of members, e.g., by pairing objects or counting them by 2s; write an equation to express an even number as a sum of two equal addends.
CCSS2.NBT.A.4
Compare two three-digit numbers based on meanings of the hundreds, tens, and ones digits, using >, =, and < symbols to record the results of comparisons.
CCSS2.NBT.A.3
Read and write numbers to 1000 using base-ten numerals, number names, and expanded form.
CCSS2.NBT.A.1
Understand that the three digits of a three-digit number represent amounts of hundreds, tens, and ones; e.g., 706 equals 7 hundreds, 0 tens, and 6 ones. Understand the following as special cases:
CCSS1.NBT.B.2
Understand that the two digits of a two-digit number represent amounts of tens and ones. Understand the following as special cases: