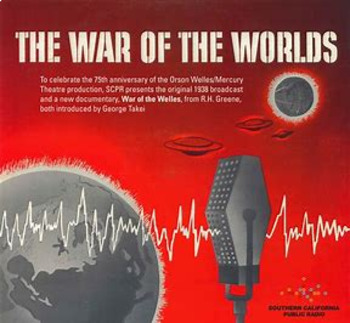 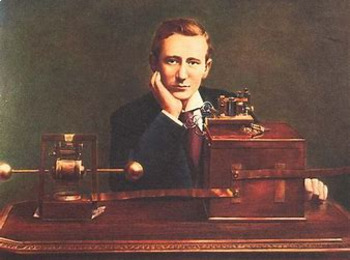 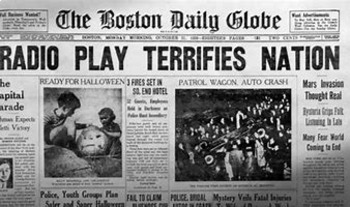 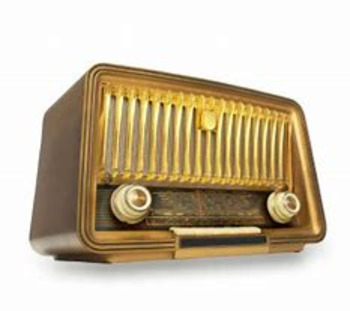 This product is a bundle of 2 power point presentations on the Invention of the Radio and its impact on the American audience in the early days when millions of listeners tuned in to a fictional radio broadcast of Martian’s invading the world. The broadcast was so “real” it caused great panic among the listeners proving the wide acceptance and impact of this medium.

There is a total of 56 slides in the two presentations and each of the presentation slides are editable so you can change it to fit your individual needs.

Radio owes its development to 2 other inventions, the telegraph and the telephone, all 3 technologies are closely related. Radio technology began as "wireless telegraphy.” However, it all started with the discovery of "radio waves" or electromagnetic waves that have the capacity to transmit music, speech, pictures and other data invisibly through the air.

Guglielmo Marconi, an Italian inventor, proved the feasibility of radio communication. He sent and received his first radio signal in Italy in 1895. By 1899 he flashed the first wireless signal across the English Channel and 2 years later received the letter "S", telegraphed from England to Newfoundland. This was the first successful transatlantic radiotelegraph message in 1902.

Many devices work by using electromagnetic waves including: radio, microwaves, cordless phones, remote controlled toys, television broadcasts, and more. Americans listened to the same sporting events and took up the same fads. Baseball games and boxing matches could now reach those far away from the stadiums and arenas. A mass national entertainment culture was flowering

On Sunday, October 30, 1938, millions of radio listeners were shocked when radio news alerts announced the arrival of Martians. They panicked when they learned of the Martians' ferocious and seemingly unstoppable attack on Earth. Many ran out of their homes screaming while others packed up their cars and fled.

Though what the radio listeners heard was a portion of Orson Welles' adaptation of the well-known book, War of the Worlds by H. G. Wells, many of the listeners believed what they heard on the radio was real. Welles had one of his writers, Howard Koch, rewrite the story of War of the Worlds. With multiple revisions by Welles, the script transformed the novel into a radio play. Besides shortening the story, they also updated it by changing the location and time from Victorian England to present day New England.

These changes reinvigorated the story, making it more personal for the listeners. Hours after the program had ended and listeners had realized that the Martian invasion was not real, the public was outraged that Orson Welles had tried to fool them. Many people sued. Others wondered if Welles had caused the panic on purpose. The power of radio had fooled the listeners. They had become accustomed to believing everything they heard on the radio, without questioning it. Now they had learned - the hard way.

War of the Worlds

“On the Scene” Reports

This is one of many power point presentations I offer in my store under the heading... Inventions and Sports & Entertainment.