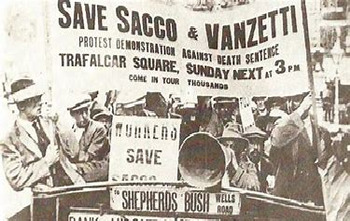 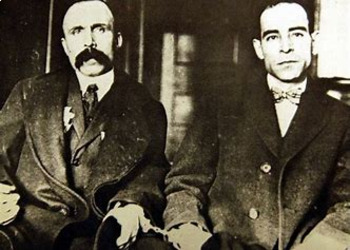 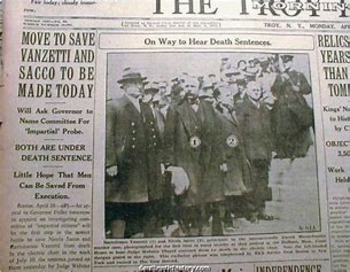 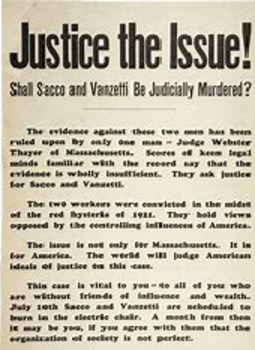 Benchmark #1: For Florida Benchmark Standard #SS.912.A1.4, the student will be required to analyze how images, symbols, objects, cartoons, graphs, charts, maps, and artwork may be used to interpret the significance of time periods and events from the past.

Benchmark #2: For Florida Benchmark Standard #SS.912.A.5.1, the student will be required to discuss the economic outcomes of demobilization.

Benchmark #3: For Florida Benchmark Standard #SS.912.A.5.2, the student will be required to explain the causes of the public reaction (Sacco and Vanzetti, labor, racial unrest) associated with the Red Scare.

Benchmark #4: For Florida Benchmark Standard #SS.912.A.5.9, the student will be required to explain why support for the Ku Klux Klan varied in the 1920s with respect to issues such as anti-immigration, anti-African American, anti-Catholic, anti-Jewish, anti-women, and anti-union ideas.

Nicola Sacco and Bartolomeo Vanzetti were Italian-born US anarchists who were convicted of murdering a guard and a paymaster during the armed robbery of the Slater and Morrill Shoe Company on April 15, 1920, in South Braintree, MA. They were executed by electrocution seven years later at Charlestown State Prison.

The Sacco and Vanzetti case is still a hotly debated today as a classic example of the tyranny of the establishment over the poor and politically non-conforming. It is generally agreed that a second trial should have been granted and that the refusal to do so was clearly unfair.

For many years there was much support for the belief that both men were wrongly convicted, but more recent scholarship has pointed to the probable guilt of Sacco and the likely innocence of Vanzetti.

This is one of many bundled presentations I offer in my store under the heading... Tutorials.