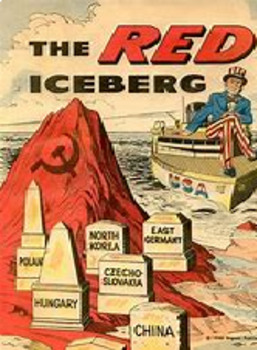 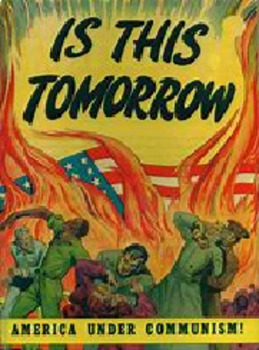 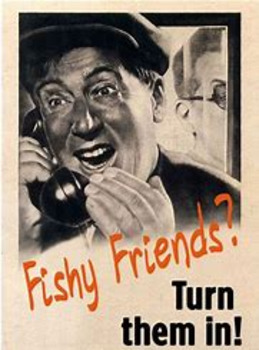 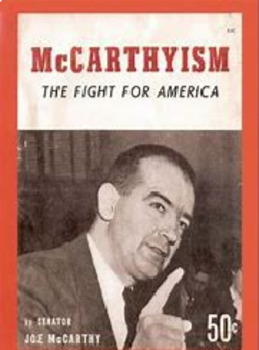 There is a total of 26-pages in the tutorial and 44 slides in the 2 power point presentations. Each of the slides and pages are editable so you may modify the presentation to meet your individual needs.

Benchmark #1: For Florida Benchmark Standard #SS.912.A.1.3. In this tutorial the student will learn to utilize timelines to identify the time sequence of historical data.

Benchmark #2: For Florida Benchmark Standard #SS.912.A.6.8, the student will be required to analyze the effects of the Red Scare on domestic United States policy.

Benchmark #3: This tutorial also references Florida Benchmark Standard #SS.912.A.6.10. In this tutorial, the student will be required to examine causes, course, and consequences of the early years of the Cold War (Truman Doctrine, Marshall Plan, NATO, Warsaw Pact).

In the early 1950s, American leaders repeatedly told the public that they should be fearful of subversive Communist influence in their lives. Communists could be lurking anywhere, using their positions as schoolteachers, college professors, labor organizers, artists, or journalists to aid the program of world Communist domination. This paranoia about the internal Communist threat is what came to be known as the Red Scare.

It reached a fever pitch between 1950 and 1954, when Senator Joe McCarthy of WI, a right-wing Republican, launched a series of highly publicized probes into alleged Communist penetration of the State Department, the White House, the Treasury, and even the US Army. McCarthy’s shrieking denunciations and fearmongering created a climate of fear and suspicion across the country. No one dared tangle with McCarthy for fear of being labeled disloyal. Many (friends and critics) were looking for President Eisenhower to step in and put a stop to the investigations! He was forced to act whenever McCarthy began to investigate the Army.

On November 14, 1908, Joseph McCarthy was born into a Roman Catholic family as the 5th of 9 children in Appleton, WI. Although McCarthy dropped out of grade school at the age of 14, he returned to diligently finish his studies in 1928, permitting him to attend Marquette University. Once accepted, he began his journey to become what many historians consider to be one of the least qualified, most corrupt politicians of his time.

Edmund Walsh, a close fellow Roman Catholic and anti-communist suggested a crusade against so-called communist subversives. McCarthy enthusiastically agreed and took advantage of the nation’s wave of fanatic terror against communism. Through the televised investigations into the United States Army and the reporters’ attack, the nation grew to realize that McCarthy was “evil and unmatched in malice.” He was finally censured by the senate.

Who Was Joseph McCarthy?

After the Soviets detonated their first atomic bomb in 1949, the U.S. government began an extensive hunt to find out who had provided them with the knowledge to make such a weapon. The U.S. Army's Signal Intelligence Service broke the code used by the Soviets to send messages in the mid-1940s. Some of these decrypted messages revealed that Julius Rosenberg, known by the codename "Liberal," was involved with the Soviets.

David Greenglass, Julius’ brother-in-law, was the first to be caught in this spying case. He then told authorities about Julius Rosenberg's activities. David had initially failed to mention Ethel’s involvement in espionage, later stating that she had participated as well.The Rosenberg’s were brought to trial the following March, and both proclaimed their innocence. By this time, the U.S. military was engaged in the Korean War, and strong anti-communist sentiments were held nationwide.

Julius and Ethel were both convicted of conspiracy to commit espionage, and in early April 1951, the couple was sentenced to death. A series of appeals delayed their execution before being carried out in June 1953. The couple's supporters also requested clemency for the Rosenberg’s from presidents Harry Truman and Dwight Eisenhower, who both denied to issue a pardon. They are the only Americans executed for spying when the nation was not at war.

This is one of many power point presentations I offer in my store under the heading....The Cold War.