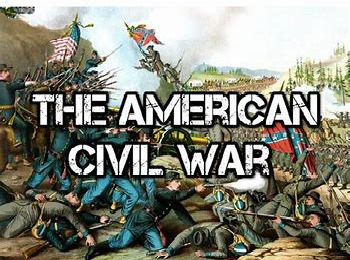 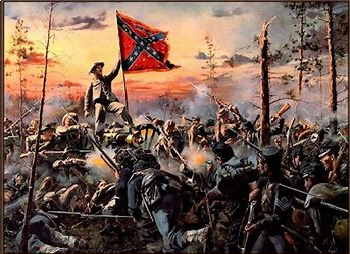 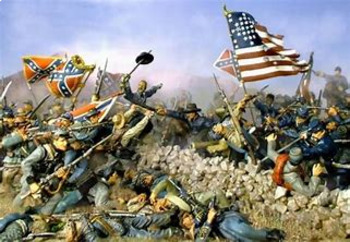 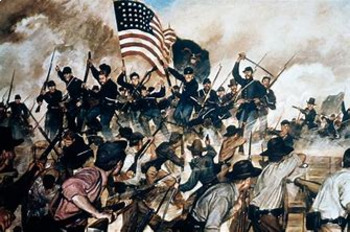 This is a bundle of 9 products on theCivil War's Legacy. The bundle includes 1 tutorial: The Civil War's Legacy and 8 highly animated, power point presentations that support the tutorial. The power point presentations include: Slave Codes and Laws, Battle of Gettysburg, The Emancipation Proclamation, The Gettysburg Address, The Civil War Amendments, The Assassination of Abraham Lincoln, Catastrophic Damage Cause by the Civil War and Reconstruction – Rebuilding a Nation.

There is a total of 16-pages in the tutorial and 212 slides in the 8 power point presentations. Each of the slides and pages are editable so you may modify the presentation to meet your individual needs.

Benchmark #1: For Florida Benchmark Standard #SS.912.A.2.1, the student will be required to review causes and consequences of the American Civil War.

Benchmark #2: For Florida Benchmark Standard #SS.912.A.2.4, the student will be required to distinguish the freedoms guaranteed to African Americans and other groups with the 13th, 14th, and 15th Amendments to the Constitution.

This presentation identifies some of the most profound slave laws and how they impacted the lives of the slaves and covers the following:

Codes for Proper Treatment of Slaves

The battle involved the largest number of casualties of the entire war and is often described as the war's turning point. Union Major General George Meade's Army of the Potomac defeated attacks by Confederate General Robert E. Lee's Army of Northern Virginia, ending Lee's attempt to invade the North.

The battle was marked by fierce fighting all three days, questionable leadership on the part of the south, and the first time the union had won a major devastating battle that would turn the fortunes of war.

Impact on the Confederacy

Aftermath of the Battle (2)

The Emancipation Proclamation was an executive order issued by President Abraham Lincoln on January 1, 1863, as a war measure during the American Civil War, directed to all of the areas in rebellion and all segments of the executive branch (including the Army and Navy) of the United States. It proclaimed the freedom of slaves in the ten states that were still in rebellion, excluding areas controlled by the Union and thus applying to 3 million of the 4 million slaves in the U.S. at the time.

The Proclamation was based on the president's constitutional authority as commander in chief of the armed forces; it was not a law passed by Congress. The Proclamation also ordered that suitable persons among those freed could be enrolled into the paid service of United States' armed forces and ordered the Union Army (and all segments of the Executive branch) to “recognize and maintain the freedom of" the ex-slaves.

The Proclamation did not compensate the owners, did not outlaw slavery, and did not grant citizenship to the ex-slaves (called freedmen). It made the eradication of slavery an explicit war goal, in addition to the goal of reuniting the Union.

What Is the Emancipation Proclamation?

What Did It Provide?

How Was It to Be Enforced?

Effect of The Proclamation (2)

Impact on the Civil War

The Gettysburg Address is a speech by U.S. President Abraham Lincoln and is one of the best-known in American history. It was delivered by Lincoln during the midpoint of the American Civil War, on the afternoon of Thursday, November 19, 1863. The occasion for the speech was to address the audience who had come to attend the dedication of the Soldiers' National Cemetery in Gettysburg, PA, four and a half months after the Union armies defeated those of the Confederacy at the Battle of Gettysburg.

President Abraham Lincoln’s remarks later became known as the Gettysburg Address, were delivered at the official dedication ceremony on the site of one of the bloodiest and most decisive battles of the Civil War. Though he was not the featured orator that day, Lincoln’s 273-word address would be remembered as one of the most important speeches in American history.

In it, he invoked the principles of human equality contained in the Declaration of Independence and connected the sacrifices of the Civil War with the desire for “a new birth of freedom,” as well as the all-important preservation of the Union created in 1776 and its ideal of self-government.

The Battle of Gettysburg

Aftermath of the Battle

The Need for a National Cemetery

Lincoln is Invited to Speak

Gettysburg Address: A Test of Survival

Legacy of the Speech

After some 600,000 American men had died of wounds, or by grossly unsanitary medical practice, Lincoln gave his second inaugural address, the famous “charity for all” speech, on March 4, 1865, one month before his death. There is a photograph of him giving this speech, which also shows John Wilkes Booth standing above and behind him, on a balcony.

Lincoln ended his speech with these words: “With malice toward none; with charity for all;…let us strive on to finish the work we are in; to bind up the nation’s wounds; to care for him who shall have borne the battle, and for his widow, and his orphan.”

On April 14, Booth, himself a well-known actor at the time, masterminded the simultaneous assassination of Lincoln, Vice President Andrew Johnson and Secretary of State William Seward. By murdering the president and two of his possible successors, Booth and his co-conspirators hoped to throw the U.S. government into disarray.

Learning that Lincoln was to the acclaimed performance of “Our American Cousin” at Ford’s Theatre in WDC. The plan was put in motion.

The Reconstruction Amendments are the Thirteenth, Fourteenth, and Fifteenth amendments to the United States Constitution, passed between 1865 and 1870, the five years immediately following the Civil War. This group of Amendments are sometimes referred to as the Civil War Amendments.

The Amendments were intended to restructure the United States from a country that was "half slave and half free" (Abraham Lincoln) to one in which the constitutionally guaranteed "blessings of liberty" would be extended to the entire populace, including the former slaves and their descendants.

The laws that came out of these amendments were not popular in the south and the Southern states often circumvented these laws or just did not implement them, beginning a Civil Rights struggle that lasted for more than 100 years in the United States.

Who Was Jim Crow?

The American Civil War was the largest catastrophic event in American History. It was the most destructive and costly event to ever occur on the United States homeland. Not only was the loss of life astronomical in terms of numbers, so too was the loss of limbs making it impossible for many to work following the war.

Death occurred as deadly disease such as diarrhea, typhoid fever, lung inflammation, dysentery, and childhood diseases like chicken pox were the cause of 67% of the deaths. Of the 3.5 million men who fought in the Civil War, the official death count was 620,000, but some now believe the count could have been as high as 750,000. This amounted to 2% of the population at that time, which would be the equivalent to about 6 million Americans dying today. The loss of life touched virtually every family and community.

The Civil War also had a high financial toll. The estimated cost of the war was $6.19 billion ($146 billion in today’s dollars). The war also brought great devastation to the landscape, massive loss of animal life, destruction of towns & cities, ruination of forests and woodlands, a collapsed economy in the South and unacceptable race relations that lasted for more than 100 years.

The group who suffered the most were the black southerners. Neither the federal nor state governments offered much material support to a people who began to negotiate free life and labor without property or education. There was no "Forty Acres and a Mule“ for them. Nor were there to be sufficient feral cattle and hogs in the woods and swamps, which might have provided the most basic sustenance for food.

With the untimely death of President Lincoln, military control of certain areas, requirements to swear allegiance to the Union, the devastation of land, livestock and crops with too few men alive or incapacitated to rebuild the south, reconstruction became a long arduous task as the south suffered the consequences of their rebellion.

NOTE: A DUE TO THE NATURE OF THE SUBJECT, A FEW SLIDES MAY BE TOUGH ON SOME STUDENTS TO LOOK AT. USE YOUR DISCRETION.

As the Civil War ended, the United States faced unprecedented tasks: Bring the defeated Confederate states back into the Union and determine the status in American society of almost four million former slaves.

These goals dominated the years from 1865 to 1877, the era known as Reconstruction. During these years, Congress imposed a legislative revolution that transformed the South. Republican legislators: Passed ambitious laws, approved major constitutional amendments, overhauled Southern state governments, and spurred extensive change in the former Confederacy.

Political Developments in the South

Political Developments in the North

This is one of several bundled power point presentations that I offer in my store on... Political Movements and Events and the American Civil War.