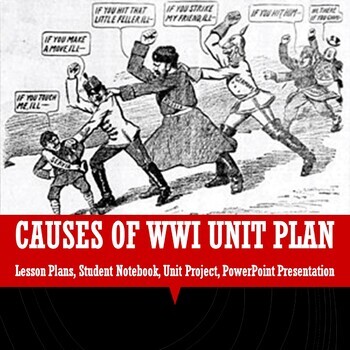 This Bundle for the Causes of World War I includes:

This PowerPoint Presentation outlines the events leading up to and the causes of World War I:

· Conflict in Europe - Content includes the Seven Weeks War, the German Confederation, the Dual Monarchy of Austria-Hungary, Prince Leopold, the Franco-Prussian War, the German Empire, and the resentment of France towards Germany.
· Empirical Power Struggles - Content includes British colonies, French colonies, Germany colonies, other European colonies, Kaiser Wilhelm II, the European arms race, the Reinsurance Treaty, the Triple Alliance, other European alliances, and the Agadir Crisis.
· Political Unrest in Austria-Hungary - Content includes nationalism, Serbian history, Turkish Ottoman Empire, the Congress of Berlin, the Black Hand, and the assassination of Archduke Franz Ferdinand and his wife Sophie.
· Events of July 1914 - Content includes the reaction to the Ferdinand assassination, the Balkan Wars, the arrest of the Serbian nationalists, Germany's support of Austria-Hungary, the secret Serbia attack plan, the opposition of Hungary to the attack, Austria-Hungary's ultimatum to Serbia, the response of the Great Powers to the war between Austria-Hungary and Serbia, Germany, Russia, France and Britain enter the war and WWI begins.