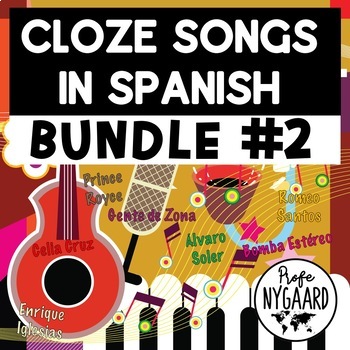 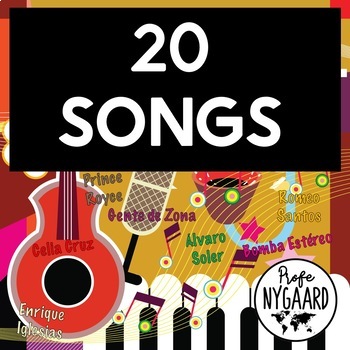 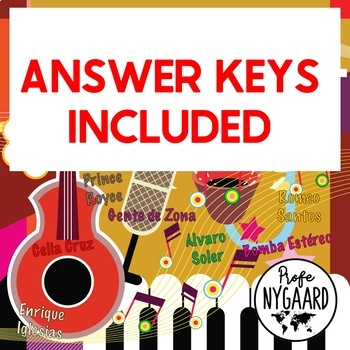 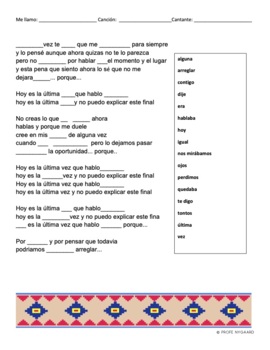 20 cloze songs! Using cloze songs as a daily routine has been life-saving for me. This is great routine to implement in your class because it brings culture into your classroom while simultaneously giving you time to take attendance while students get in some listening practice. Not to mention- the lyrics get stuck in the students' head! I love it when I catch my students singing along.

The songs included in this bundle:

There are no other activities included on the worksheet- just the lyrics with some words missing.

MY EXACT ROUTINE FOR USING CLOZE SONGS IN CLASS:

Every Monday students get a new cloze song. On Mondays I go over the definitions for the vocab in the word bank. We then listen to the song for the first time. I collect the songs and store them in bins by my door. Every day the rest of the week, students grab their song from their hour's bin as they enter class. As soon as the bell rings, I start the song. During the song I am able to take attendance and make sure I am ready to go for class. On Fridays we grade them. Students pass their songs to the person behind them and we grade the songs as a class (I print the answer key to a Smart Notebook Document and I highlight 5 of the words they had to fill in). I only grade them on those 5 words I highlighted. So, their songs are worth 5 points each week.