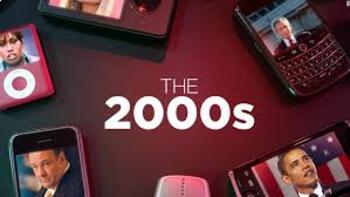 Viewing Guides with Answer Keys to the following Episodes:

Television in the United States during the 2000s, including HBO's The Sopranos, Six Feet Under, and Entourage, reality television, mockumentary-style sitcoms such as The Office, the creative renaissance, Dexter, and AMC's notable entries into original programming such as Mad Men and Breaking Bad.

The election of George W. Bush, terrorism in the United States during the 2000s, including the September 11 attack and the launch of the War on Terror.

Technology in the 2000s, including the dot-com bubble, the rise of Google, Apple's further growth, smartphones, and Web 2.0 services and social networks such as Friendster, MySpace, YouTube, and Facebook.

The financial crisis that threatened the global economy in the 2000s.

The campaign and election of Barack Obama.

Music of the 2000s and the shift to digital distribution.