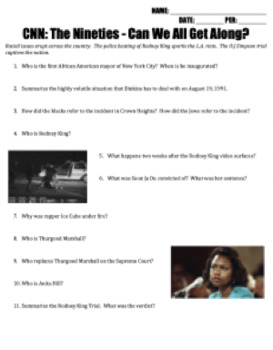 Television of the 1990s, including evolutions in dramas and sitcoms, growing competition in late night comedy, the increasing representation of African Americans on TV, and increasing prominence of cable and premium television.

The presidency of Bill Clinton, including his accomplishments and Lewinsky scandal.

Social issues of the 1990s, including the Los Angeles riots, the O.J. Simpson murder case, the Crown Heights riot, and the Clarence Thomas nomination hearing.

International politics of the 1990s, including the Gulf War, the dismantling of the Soviet Union, and the 1992 presidential election.

Terrorism in the United States during the 1990s, including the World Trade Center bombing, the Unabomber, the Centennial Olympic Park bombing, the Oklahoma City bombing, the Columbine High School shooting, and the rise of Osama bin Laden.

The mainstream adoption of the Internet; the browser war and Microsoft's antitrust case; the fall and resurgence of Apple; dot-com companies, including Amazon and eBay, and Y2K.

All episodes of CNN: The Nineties are available on Netflix and can also be found online.