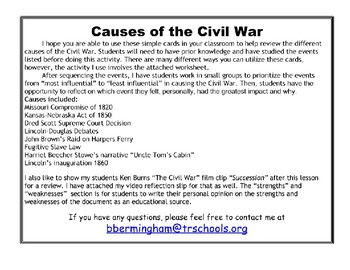 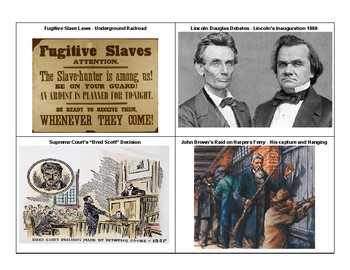 The Art of Learning

This is a great review activity before diving into the actual Civil War.

Students will need to have prior knowledge and have studied the events listed before doing this activity. There are many different ways you can utilize these cards, however, the activity I use involves the included reflection sheet.

After sequencing the events, I have students work in small groups to prioritize the events from “most influential” to “least influential” in causing the Civil War. Then, students have the opportunity to reflect on which event they felt, personally, had the greatest impact and why.

I also like to show my students Ken Burns “The Civil War” film clip “Succession” after this lesson for a review. I have included my video reflection slip for that as well. The “strengths” and “weaknesses” section is for students to write their personal opinion on the strengths and weaknesses of the document as an educational source.