Celestial Bodies in the Solar System 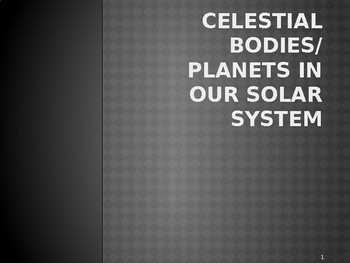 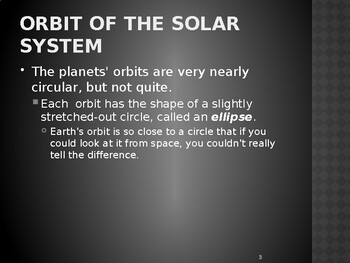 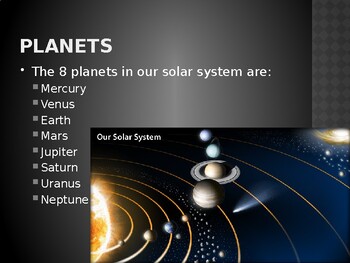 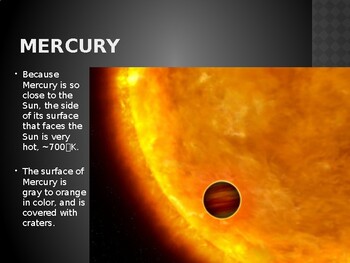 This slideshow includes all of the following terms and definitions:

Ancient astronomers believed that the Earth was the center of the Universe, and that the sun and all the other stars revolved around the Earth.

Copernicus proved that Earth and the other planets in our solar system orbit our sun.

Orbit of the solar system

The planets' orbits are very nearly circular, but not quite.

Each  orbit has the shape of a slightly stretched-out circle, called an ellipse.

Earth's orbit is so close to a circle that if you could look at it from space, you couldn't really tell the difference.

Orbit of the Solar System

The planets take different amounts of time to go around the Sun.

A single orbit is called the planet's year, and the further out a planet is the longer its year takes.

As a planet orbits, it also rotates on it’s axis.

One rotation equals a planetary day.

Orbit of the Solar System

Kepler's three laws of planetary motion can be described as follows:

The path of the planets about the sun is elliptical in shape, with the center of the sun being located at one focus.

(The Law of Ellipses)

(The Law of Equal Areas)

(The Law of Harmonies)

Components in our solar System

Our solar system consists of:

What are the requirements to be classified as a planet?

is in orbit around the Sun,

has sufficient mass to assume hydrostatic equilibrium (a nearly round shape), and

has "cleared the neighborhood" around its orbit.

The 8 planets in our solar system are:

Mercury is the closest planet to the Sun.

It orbits the Sun quickly, once every 88 days.

It rotates slowly, however, only once every 59 days.

Because Mercury is so close to the Sun, the side of its surface that faces the Sun is very hot, ~700EK.

The surface of Mercury is gray to orange in color, and is covered with craters.

Since Mercury is normally lost in the glare of the Sun, unless there is a solar eclipse it can be viewed from Earth’s Northern Hemisphere only in morning or evening twilight.

Mercury is named for a mythical god who ran very fast.

Venus, the second planet away from the Sun, is Earth’s closest neighbor.

Venus has a very thick atmosphere, composed largely of sulphuric acid and CO2.

We could not breathe on Venus, because the atmosphere would be very toxic to humans.

It also traps heat (the greenhouse effect) making the surface of Venus the hottest in the Solar System, about 750EK.

It is named for the Roman goddess of love.

Earth is a little more than 12,000 kilometers in diameter.

It differs from the other planets because it has liquid water on its surface, maintains life, and has active plate movement.

It rotates on its axis every 24 hours (a day) and revolves around the Sun every 365 days (a year).

The Earth has one moon.

Mars is a little more than half the size of the Earth, having a diameter of 6,790 km

It takes Mars 687 days to revolve once around the Sun.

It rotates at about the same speed as the Earth, taking 24.6 hours.

Mars has a very thin atmosphere which is composed largely of CO2.

Its surface is very cold, and is covered with craters, volcanoes, and large canyons.

Mars is reddish in color.

It is named for the Roman god of war.

Jupiter is the largest planet in the Solar System, with a diameter of 142,980 kilometers, more than 11 times wider than the Earth.

Jupiter orbits the Sun once every 12 years.

It rotates very fast, in only 10 hours.

Its surface is made up of gas (mostly hydrogen), so that if you landed on the surface you would sink into it.

Jupiter probably has a core of metallic hydrogen and rock, although evidence for this is theoretical.

The outer gaseous part of Jupiter is broken into bands of white, yellow, red, and brown clouds.

Jupiter is named for the Roman supreme god of heaven.

Saturn is well known for its system of three rings.

It is a large planet: at 120,536 kilometers it is only a little smaller than Jupiter.

It revolves around the Sun in 12 years, and rotates a little more than 10 hours.

Like Jupiter, Saturn is composed of mostly gas, and has a core composed of rock and metallic hydrogen.

The surface of Saturn looks banded, and has a brown-yellow, butterscotch color.

Saturn’s rings are probably composed of small particles of ice and rock.

It is named for the Roman god of agriculture.

It revolves around the Sun slowly, taking 84 years to complete one orbit.

It rotates in about 17 hours.

It is covered by a thick layer of gas, and has a fairly uniform blue-green color.

Uranus has 21 named moons and six unnamed ones and  is surrounded by a system of nine rings.

It is named for another Roman god, the grandfather of Jupiter.

Neptune is slightly smaller than Uranus, with a diameter of 49,500 kilometers.

It circles the Sun once every 165 years, and rotates in 16 hours.

Its atmosphere appears blue , and is marked by large dark blue storm systems.

It is surrounded by a system of five rings and at least 13 moons.

Neptune is named for the Roman god of the ocean.

The world was introduced to dwarf planets in 2006, when petite Pluto was stripped of its planet status and reclassified as a dwarf planet.

What differentiates a dwarf planet from a planet?

For the most part, they are identical, but there's one key difference:

A dwarf planet hasn't "cleared the neighborhood" around its orbit, which means it has not become gravitationally dominant and it shares its orbital space with other bodies of a similar size.

Because it has not cleared the neighborhood around its orbit, Pluto is considered a dwarf planet.

It orbits in a disc-like zone beyond the orbit of Neptune called the Kuiper belt, a distant region populated with frozen bodies left over from the solar system's formation.

The dwarf planet is a whopping 3.7 billion miles (5.9 billion kilometers) from the sun, and its average temperature hovers around -356 degrees Fahrenheit (-215 degrees Celsius).

Pluto's surface is composed of a mixture of frozen nitrogen, methane, and carbon monoxide ices.

The dwarf planet also has polar caps and regions of frozen methane and nitrogen.

Also considered by many to be an asteroid, Ceres, like Pluto, was also renamed as a dwarf planet in 2006.

It is by far the largest and most massive known body in the asteroid belt, and it contains about one-third of the estimated total mass of all asteroids in the belt.

Ceres is made up of a rocky inner core surrounded by a mantle of water-ice.

It is named after the Roman goddess of grain.

They are generally solid bodies, and few have atmospheres.

Most of the planetary moons probably formed from the discs of gas and dust circulating around planets in the early solar system.

Astronomers have found at least 146 moons orbiting planets in our solar system.

This number does not include the six moons of the dwarf planets, nor does this tally include the tiny satellites that orbit some asteroids and other celestial objects.

Another 23 moons are awaiting official confirmation of their discovery.

Of the terrestrial (rocky) planets of the inner solar system, neither Mercury nor Venus have any moons at all, Earth has one and Mars has its two small moons.

In the outer solar system, the gas giants Jupiter and Saturn and the ice giants Uranus and Neptune have numerous moons.

As these planets grew in the early solar system, they were able to capture objects with their large gravitational fields.

Jupiter has 63 known satellites (as of 2004) including  the four large Galilean moons (Io, Europa, Callisto, and Ganymede) plus many more small ones some of which have not yet been named.

These shepherd moons help keep the rings in line. Saturn's moon Titan, the second largest in the solar system, is the only moon with a thick atmosphere

In the realm of the ice giants, Uranus has 27 known moons.

The inner moons appear to be about half water ice and half rock.

Miranda is the most unusual; its chopped-up appearance shows the scars of impacts of large rocky bodies.

Neptune has 13 known moons. And Neptune's moon Triton is as big as the dwarf planet Pluto and orbits backwards compared with Neptune's direction of rotation.

Pluto's large moon Charon is about half the size of Pluto.

Like Earth's Moon, Charon may have formed from debris resulting from an early collision of an impactor with Pluto.

Our Moon makes Earth a more livable planet by moderating our home planet's wobble on its axis, leading to a relatively stable climate, and creating a rhythm that has guided humans for thousands of years.

Earth's Moon probably formed when a large body about the size of Mars collided with Earth, ejecting a lot of material from our planet into orbit.

Debris from the early Earth and the impacting body accumulated to form the Moon approximately 4.5 billion years ago (the age of the oldest collected lunar rocks).

Twelve American astronauts landed on the Moon during NASA's Apollo program from 1969 to 1972, studying the Moon and bringing back rock samples.

Asteroids are rocky, airless worlds that orbit our sun, but are too small to be called planets.

Tens of thousands of these "minor planets" are gathered in the main asteroid belt, a vast doughnut-shaped ring between the orbits of Mars and Jupiter.

Some are `rubble piles' held together by gravity (eg., Mathilde, in `A' at right).

Mathilde is made of carbon-rich compounds and appears quite dark.

Eros, in contrast, is made of silicon-rich rock.

About three-fourths of all asteroids are dark and carbon-rich like Mathilde, while most of the rest are brighter and silicon-rich like Eros.

There are also a significant number of metallic asteroids composed of iron and nickel.

This indicates that some asteroids are fragments of larger objects which differentiated after forming and before being broken up by collisions.

Little chunks of rock and debris in space are called meteoroids.

They become meteors -- or shooting stars -- when they fall through a planet's atmosphere; leaving a bright trail as they are heated to incandescence by the friction of the atmosphere.

Pieces that survive the journey and hit the ground are called meteorites.

Comets are cosmic snowballs of frozen gases, rock and dust roughly the size of a small town.

When a comet's orbit brings it close to the sun, it heats up and spews dust and gases into a giant glowing head larger than most planets.

The dust and gases form a tail that stretches away from the sun for millions of kilometers.

Having an elliptical orbit means there is a point for each comet where it is closest to the Sun.

At this point we say that it is at perihelion

"helio" is the root word for Sun

There is also a point where the comet is farthest away from the Sun.

At this point, we say that it is at aphelion.

Comets were created from the same spinning cloud of gas and dust as the planets, they continue that motion, revolving around the Sun like the planets and everything else in the solar system.

Like the planets, each comet travels on an orbit.

The Kuiper Belt is a disc-shaped region of icy objects beyond the orbit of Neptune -- billions of kilometers from our sun.

Pluto and Eris are the best known of these icy worlds.

There may be hundreds more of these ice dwarfs out there.

The Kuiper Belt and even more distant Oort Cloud are believed to be the home of comets that orbit our sun.