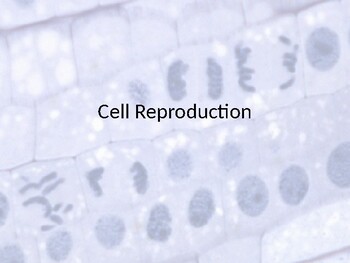 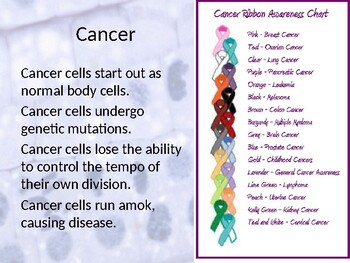 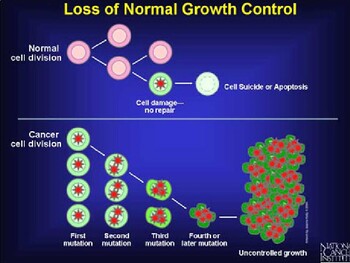 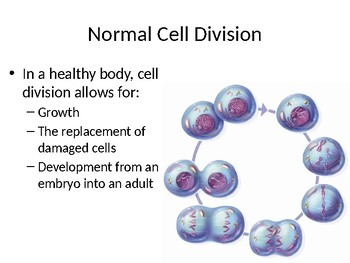 This PowerPoint presentation contains all of the following terms and definitions:

Cancer cells lose the ability to control the tempo of their own division.

•In a healthy body, cell division allows for:

–The replacement of damaged cells

–Development from an embryo into an adult

•In sexually reproducing organisms, eggs and sperm result from mitosis and meiosis.

•Cell division plays many important roles in the lives of organisms.

–One of the characteristics of being considered living is the ability to reproduce.

•Reproduction at the cellular level

•For reproduction of single-celled organisms,

•Growth of multicellular organisms from a fertilized egg into an adult,

•Repair and replacement of cells, and

•2 Methods in which living organisms Reproduce

–Involves inheritance of all genes from one parent.

–Produces offspring that are similar to the parents, but show variations in traits, and

–Involves inheritance of unique sets of genes from two parents.

•Unicellular organism with NO nucleus or organelles.

•Uni- or multi-cellular organism with organelles and a nucleus.

•The chromosome of a prokaryote is:

–A singular circular DNA molecule associated with proteins and

–Much smaller than those of eukaryotes.

•Binary fission of a prokaryote occurs in 3 stages:

•Continued elongation of the cell and movement of the copies, and

•The Eukaryotic Cell Cycle and Mitosis

•Are more complex and larger than prokaryotic cells,

•Have more genes, and

•Store most of their genes on multiple chromosomes within the nucleus

•Eukaryotic chromosomes are composed of chromatin consisting of:

•One long DNA molecule and

•Proteins that help maintain the chromosome structure and control the activity of its genes.

•To prepare for division, the chromatin becomes:

•Visible with a microscope.

•Before a eukaryotic cell begins to divide, it duplicates all of its chromosomes resulting in:

•Joined together by a central “waist” called the centromere.

•When a cell divides, the sister chromatids:

•Separate from each other, now called chromosomes, and sort into separate daughter cells.

•The cell cycle is an ordered sequence of events that extends from the time a cell is first formed from a dividing parent cell until its own division.

•The Cell Cycle consists of two stages, characterized as follows:

–Mitosis- division of the nucleus

•Mitosis progresses through a series of stages.

•A mitotic spindle is:

•Required to divide the chromosomes, composed of microtubules, and

•Structures in the cytoplasm that:

–Contain a pair of centrioles in animal cells.

•Chromosomes duplicate in the nucleus during the S phase, and

–Microtubules begin to emerge from centrosomes, forming the spindle.

•Spindle microtubules reach chromosomes, where they

–Attach at kinetochores on the centromeres of sister chromatids and

–Other microtubules meet those from the opposite poles

•The mitotic spindle is fully formed

•Chromosomes align at the cell equator

•Sister chromatids separate at the centromeres

•Daughter chromosomes are moved to opposite poles of the cell as

–Motor proteins move the chromosomes along the spindle microtubules, and

•The cell elongates due to lengthening of non-kinetochore microtubules.

•The cell continues to elongate.

•The nuclear envelope forms around chromosomes at each pole, establishing daughter nuclei.

•During cytokinesis, the cytoplasm is divided into separate cells.

•The process of cytokinesis differs for plants and animals.

•In plant cells, cytokinesis occurs as:

–The cell plate grows outward to reach the edges, dividing the contents into two cells.

–Each cell now possesses a plasma membrane and cell wall.

•In animal cells, cytokinesis occurs as:

–A cleavage furrow from a contracting ring of microfilaments, interacting with myosin, and

–The cleavage furrow deepens to separate the contents into two cells.

•The cells within an organism’s body divide and develop at different rates.

•Cell division is controlled by

–The presence of essential nutrients,

–Density-dependent inhibition, in which crowd cells stop dividing, and

–Anchorage dependence, the need for cells to be in contact with a solid surface to divide.

•Checkpoints in the cell cycle can

–Stop an event or

–Signal an event to proceed.

•There are three major checkpoints in the cell cycle.

•Allows entry into the S phase or

•Causes the cell to leave the cycle, entering a non-dividing G0 phase.

•Research on the control of the cell cycle is one of the hottest areas in biology today.

–Cancer currently claims the lives of 20% of the people in the United States and other industrialized nations.

•Divide rapidly, often in the absence of growth factors,

•Spread to other tissues through the circulatory system , and

•Grow without being inhibited by other cells.

•A tumor is an abnormally growing mass of body cells.

•Connection: Cancers are named according to the organ or tissue in which they originate.

•Localized tumors can be…

•Chemotherapy is used for metastatic tumors.

•Meiosis and Crossing Over

•Chromosomes are matched in homologous pairs

•In humans, somatic cells have

–23 pairs of homologous chromosomes and

–One member of each pair from each parent.

•The human sex chromosomes X and Y differ in size and genetic composition.

•The other 22 pairs of chromosomes are autosomes with the same size and genetic composition.

•Homologous chromosomes are matched in…

•A locus (plural, loci) is the position of a gene.

•Different versions of a gene may be found at the same locus on maternal and paternal chromosomes.

•Gametes have a single set of chromosomes.

•An organism’s life cycle is the sequence of stages leading…

•From the adults of one generation

•To the adults of the next.

•Humans and many animals and plants are diploid, with body cells that have

•one from each parent.

•Meiosis is a process that converts diploid nuclei to haploid nuclei.

•Haploid cells have one set of chromosomes.

•Fertilization is the union of sperm and egg.

•The zygote has a diploid chromosome number, one set from each parent.

•All sexual life cycles include an alternation between

•A diploid stage and

•Producing haploid gametes prevents the chromosome number from doubling in every generation.

•Meiosis is a type of cell division that produces haploid gametes in diploid organisms.

•Two haploid gametes combine in fertilization to restore the diploid state in the zygote.

•Meiosis and mitosis are preceded by the duplication of chromosomes. However,

–Meiosis is followed by two consecutive cell division and

–Mitosis is followed by only one cell division.

•Because in meiosis, one duplication of chromosomes is followed by two divisions, each of the four daughter cells produced has a haploid set of chromosomes.

•Mitosis and meiosis have important similarities and differences

•Mitosis and meiosis both…

–Begin with diploid parent cells that

–Have chromosomes duplicated during the previous interphase.

–However, the end products differ.

•Independent assortment of chromosomes in meiosis and random fertilization lead to varied offspring.

•Genetic variation in gametes results from

•Independent orientation at metaphase I and

–The combination of each unique sperm with each unique egg increases genetic variability.

•Independent orientation at metaphase I

•Each pair of chromosomes independently aligns at the cell equator.

•There is an equal probability of the maternal or paternal chromosome facing a given pole.

–The combination of each unique sperm with each unique egg increases genetic variability.

–Homologous chromosomes may have different versions of a gene at the same locus.

–Since homologues move to opposite poles during anaphase I, gametes will receive either the maternal or paternal version of the gene.

•Genetic recombination is the production of new combination of genes due to crossing over.

•Crossing over is an exchange of corresponding segments between separate (Non-sister) chromatids on homologous chromosomes.

–Nonsister chromatids join at a chiasma (plural, chiasmata) the site of attachment and crossing over.

–Corresponding amounts of genetic material are exchanged between maternal and paternal (nonsister) chromatids.

•Alterations of Chromosome Number and Structure

•A karyotype is a photographic inventory of an individual’s chromosomes.

•A karyotype is an ordered display of magnified images of an individual's chromosomes arranged in pairs.

–Allow for the observation of

•Connection: An extra copy of chromosome 21 causes Down syndrome

–Involves the inheritance of three copies of chromosome 21 and

–Is the most common human chromosome abnormality.

•Trisomy 21, called Down Syndrome, produces a characteristic set of symptoms, which include:

–Susceptibility to respiratory infections, leukemia, and Alzheimer’s disease, and

•The incidence increases with the age of the mother.

•Nondisjunction is the failure of chromosomes or chromatids to separate normally during meiosis. This can happen during:

–Meiosis I, if both members of a homologous pair go to one pole or

–Meiosis II if both sister chromatids go to one pole.

•Fertilization after nondisjunction yields zygotes with altered numbers of chromosomes.

•Sex chromosomes abnormalities tend to be less severe, perhaps because of:

–The small size of the Y chromosomes or

•In general, a single Y chromosome is enough to produce “maleness,” even in combination with several X chromosome, and

•The absence of a Y chromosome yields “ femaleness”

•Errors in mitosis or meiosis may produce polyploid species, with more than two chromosome sets.

•The formation of polyploid species is:

–Widely observed in many plant species but

•Chromosome breakage can lead to rearrangements that can produce

•These arrangements may include

–A deletion, the loss of a chromosome segment,

–Is one of the most common leukemias,

–Affects cells that give rise to white blood cells (leukocytes), and