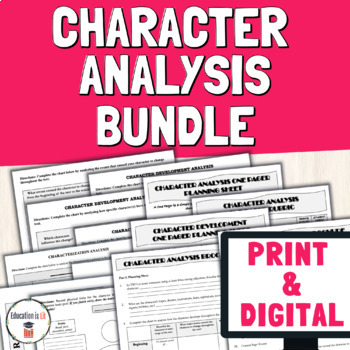 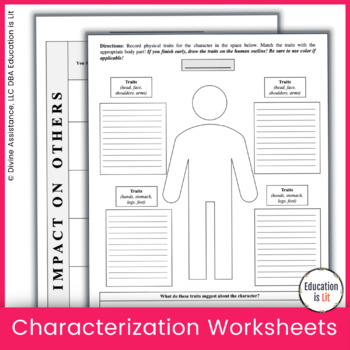 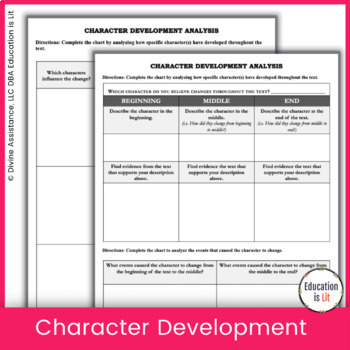 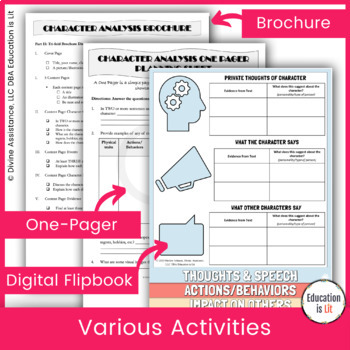 - PDF Fill In (have your students type directly on the PDF via PDF form boxes!)

- Graphic organizer focusing on physical traits of an individual character

- Worksheet focusing on students analyzing the interactions with two characters and what it suggests about their relationship. (2 versions)

Students are tasked with analyzing how a character develops from beginning - middle - end through plot and character interactions.

- Worksheet focusing on how events cause the character to develop throughout the text.

- Worksheet focusing on how other characters can influence a characters development throughout the text.

- Worksheet combining both above. (2 versions)

1. TWO Brochure Options: Bi- Fold OR Tri-Fold which include:

In this engaging character analysis activity students create a brochure showcasing their understanding of a major character they have analyzed.

Have students show their understanding and knowledge of a character with this creative and engaging one pager activity.

This activity can also be found in my One Pager Activity Bundle for Books, Plays, Articles, Research Topics & About Me!

Focuses on the personality of the character and analyzes how indirect and direct characterization is used to reveal details about the character.

Focuses on how a character changes from beginning - middle - end and the events and other characters that caused the changes.

Two engaging digital flipbook activities focusing on direct and indirect characterization as well as character development from beginning - middle - end. These are great distance learning character analysis activities in the form of a digital Flipbook accessible on Google Classroom™ AND Microsoft PowerPoint!

This flipbook contains a tab for:

This flipbook contains a tab for:

☆ Be sure to follow my store to be alerted about new products.

☆ Want to earn TPT credits that can get you a discount on your next purchase? Don't forget to leave feedback!