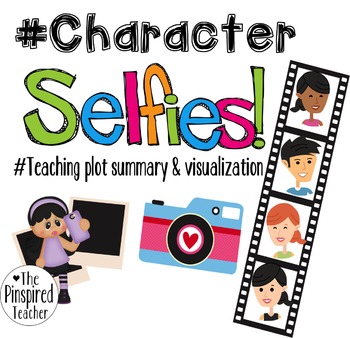 Do your students have a cell phone? If they do, chances are they take "selfies" (photos of themselves) all the time. Turn this favorite pastime into an activity that will strengthen their comprehension skills! Not to mention, you will be one cool teacher for these 21st century kids!

Summary: Have students make their character take a selfie at the end of each chapter to summarize the chapter.

Point of View: Students provide a caption written in the point of view of the character.

Visualization: Students combine textual evidence and their creativity to visualize a scene from the text.

Have the students use evidence from the text to include details in the picture of who the character might be with, the setting, the facial expression the character may be making after facing a challenge etc.

Here are some standards you might use this activity for:
Common Core Standards:

Third Grade:
CCSS.ELA-LITERACY.RL.3.6
Distinguish their own point of view from that of the narrator or those of the characters.

CCSS.ELA-LITERACY.RL.3.9
Compare and contrast the themes, settings, and plots of stories written by the same author about the same or similar characters (e.g., in books from a series) (Analyze a series of character selfies from one book to another with the same character)

Fifth Grade
CCSS.ELA-LITERACY.RL.5.6
Describe how a narrator's or speaker's point of view influences how events are described.

CCSS.ELA-LITERACY.RL.5.2
Determine a theme of a story, drama, or poem from details in the text, including ****how characters in a story or drama respond to challenges**** or how the speaker in a poem reflects upon a topic; summarize the text.

Sixth Grade
CCSS.ELA-LITERACY.RL.6.3
Describe how a particular story's or drama's plot unfolds in a series of episodes as well as how the characters respond or change as the plot moves toward a resolution.

8th Grade
CCSS.ELA-LITERACY.RL.8.6
Analyze how differences in the points of view of the characters and the audience or reader (e.g., created through the use of dramatic irony) create such effects as suspense or humor.