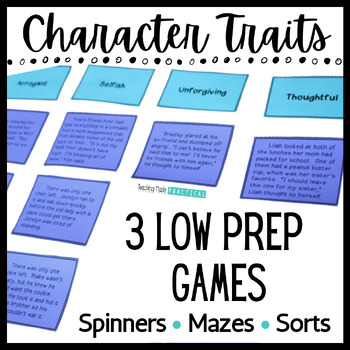 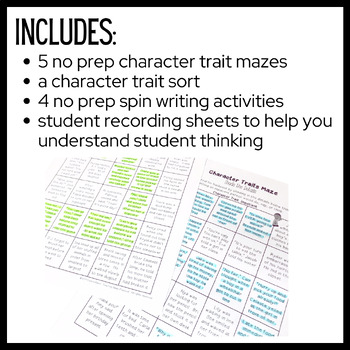 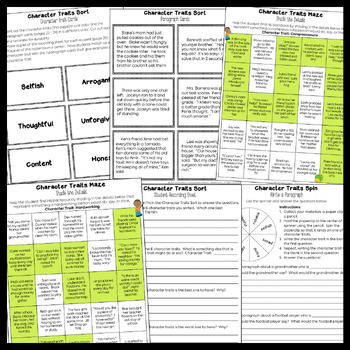 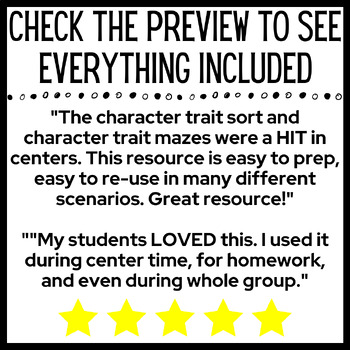 This 27 page resource contains 3 character trait centers for you to use in your classroom. These centers / games are an engaging way to help your students think about what characters with certain traits would do, say, and think. The centers include a character trait writing activity, mazes, and a sort.

Save over 30% when you buy this as part of my Character Traits Bundle!

Students use a pencil and a paper clip to "spin" a certain character trait. Then, they have to write down a paragraph explaining something that a character with that trait would do, say, or think. 4 different pages with different spinners are included. This makes a fun character trait writing activity.

This a great way for your 3rd grade or 4th grade students to practice what they have learned about character traits. This can also be used as a character trait station.

Total Pages
28 pages
Answer Key
Included with rubric
Teaching Duration
N/A
Report this Resource to TpT
Reported resources will be reviewed by our team. Report this resource to let us know if this resource violates TpT’s content guidelines.

Log in
to see state-specific standards (only available in the US).
CCSSRL.4.3
Describe in depth a character, setting, or event in a story or drama, drawing on specific details in the text (e.g., a character’s thoughts, words, or actions).
CCSSRL.3.3
Describe characters in a story (e.g., their traits, motivations, or feelings) and explain how their actions contribute to the sequence of events.