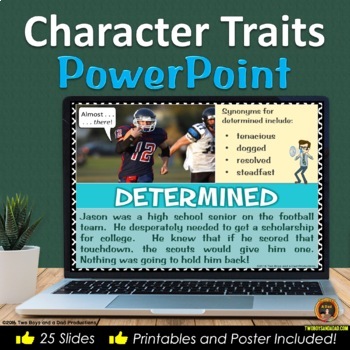 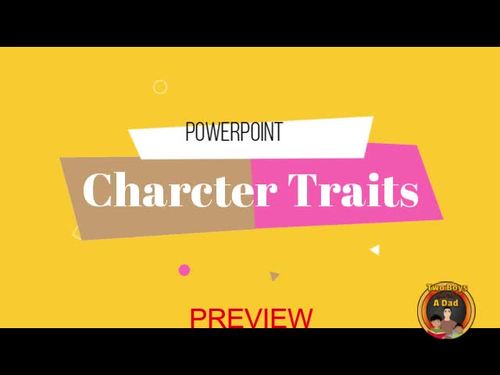 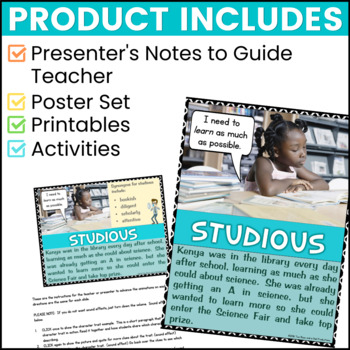 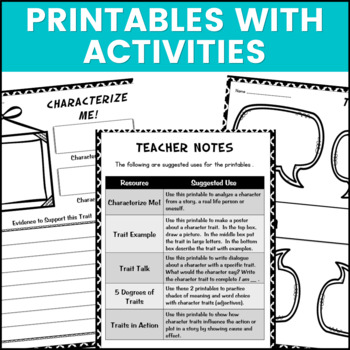 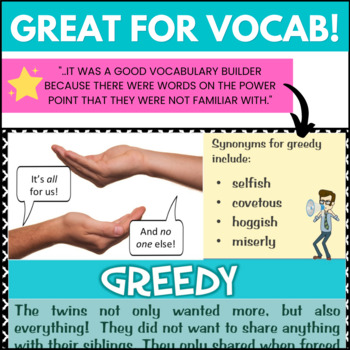 Start with this animated PowerPoint to teach 25 basic character traits.

There are a total of 25 slides, each depicting a character trait. The 25 character traits are the most commonly seen in text and movies, such as honesty, bravery, superstitious, and determination.

The slides have been reformatted to make 25 portrait posters of each character trait. They are in color. Print once, laminate, and use for years.

Included are five suggestions for using the posters

There are five printables to use with the PowerPoint or with the posters. They are to be used to further and deepen the understanding of character traits and how they influence the story plot.

Each printable is generic, making it usable with any character trait, character, person, or story.

Also included is a poster to explain what a character trait is. For one of the poster activities, there are 12 Fairy Tale Character cards to match fairy tale characters to traits.

CHARACTER TRAITS included in this resource

When you download this resource, there will be a ZIP file containing:

PLEASE NOTE: NONE OF THE FILES ARE EDITABLE.

Check out the preview to see what's included.

⭐️⭐️⭐️⭐️⭐️ Shelly M. says, "It is so hard to teach character traits. THIS resource is fabulous!!"

⭐️⭐️⭐️⭐️⭐️ Ashley F. says, "I downloaded this in a crunch because my students finished what I had planned for the day early, go figure lol. But they loved this power point, working through it to figure out the character traits. And it was a good vocabulary builder because there were words on the power point that they were not familiar with."