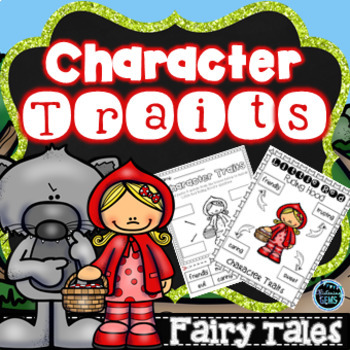 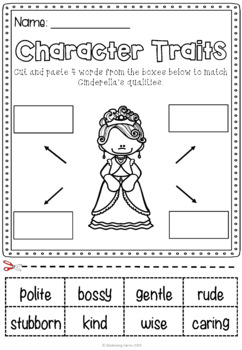 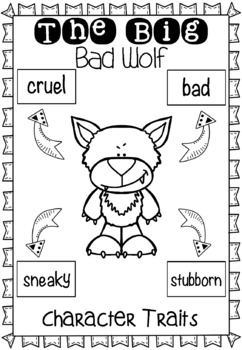 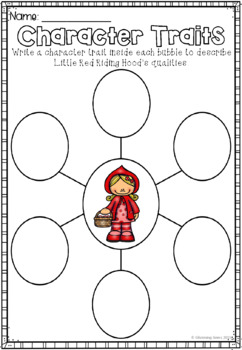 Glistening Gems
2.1k Followers
Follow
Compatible with Easel
This bundle contains one or more resources that can be converted to interactive versions that students can complete from any device, using Easel by TpT. Learn more.
Compatible with Digital Devices
The Teacher-Author has indicated that this resource can be used for device-based learning.

Fairy Tales Included In This Kit:

• Jack and the Beanstalk

Character Traits Activities - Who am I?

"Wow ! This truly has everything I needed for character traits!" by A Pencil For Your Thoughts

"So many resources in this pack. It was a great way to differentiate for my 2nd grade kiddos that needed a bit more support with this skill. " by Peace Love Primary

"I absolutely love this entire pack! It's great for a quick check or an activity for my kiddos! They love using these task cards in groups, partners, or centers. Thank you!" by Mrs. Fidler

"I cannot wait to use this wonderful resource this week!! I love everything in it!" by Kathryn M.

Students will cut and paste character traits from the popular fairy tales below:

♥ Jack and the Beanstalk

♥ 13 bubble maps - students write their own character traits to describe the characters.

These set of digital Boom Cards are similar to the printable character traits resource listed above. Fairy Tales Digital Boom Cards are a fun and interactive way for your students to identify character traits of characters in popular fairy tales. These digital task cards accompany the fairy tales: Cinderella, Jack and the Beanstalk, The Three Little Pigs, and Little Red Riding Hood. Fairy Tales Boom Deck is so easy to use, and students can self-check their answers as they go! This paperless activity is perfect for distance learning for students, or for parents to use with their children whilst learning at home!

With your Teachers Pay Teachers purchase, users new to Boom Learning get a three-month free trial of student progress reporting for up to 150 students. Your trial includes the ability to make up to 5 free DIY decks. You may upgrade or cancel at any time. Boom Cards play on modern browsers (released in the last three years) on interactive whiteboards, computers and tablets. Boom Cards apps are also available. Not sure if your browser is modern enough? Try a free Boom Cards deck first. When you redeem your purchase, Boom Learning opens an account for you if you do not already have one. If you do not subscribe at the end of your trial, you will be able to continue using Boom Cards with the Fast Play feature. Fast Play does not track individual progress. If you do not subscribe we will delete your student records 3 months after the expiration of the trial to protect student privacy.

Fairy Tales Character Traits and Physical Traits Task Cards contains both digital Boom Cards and printable task cards. Both products consist of the same questions except one is in digital format and the other is in print. This kit accompanies the fairy tales: Cinderella, Jack and the Beanstalk, Little Red Riding Hood, Snow White and The Three Little Pigs. Included in this deck are 20 Boom Cards and 20 printable task cards! This activity is perfect for distance learning for students, or for parents to use with their children whilst learning at home!

This character trait pack provides additional practice in sorting various character traits under the correct heading. Sorts are a great hands on activity where students are actively engaged and expanding their vocabulary.

This pack includes the following printables:

• 6 answer sheets to cut and paste sorting activities only

The pack entails the following:

• two sets of 21 wanted posters in color and black and white for characters listed from the fairy tales above and an A-Z worksheet where students list character traits of characters.

Who am I- Character Traits

The character traits printables entails the following activities in color and black and white for the popular fairy tales - Jack and the Beanstalk, Little Red Riding Hood, Cinderella, Snow White and The Three Little Pigs:

• 5 worksheets - students write a character trait to match each fairy tale character - suited for students who can construct a simple sentence.

• 10 worksheets - students write 3 character traits to match the character - suited for students who require extension or the more able writers.

• 1 worksheet - students choose their own fairy tale character and write 3 character traits to describe the character. This activity is great for extension or early finishers. This worksheet is also a great resource to have as you can use it for any characters throughout the year.

100 character traits word maps, graphics organizers are included in both color and black and white. The templates are great to use when students are learning all about character traits, vocabulary, synonyms and definitions of words. These word maps will assist students to consolidate their understanding of character traits.

These graphic organizers can be used for any grades from lower primary to high school. Teaching students new vocabulary is a vital skill for students to learn and will also assist them with their comprehension skills of interpreting meanings of words.

On each character traits word map template - there is a character trait, boxes for sentence, picture, meaning and synonyms. In each box students write:

• write the character trait in a sentence.

• write synonyms for the character trait

• draw a picture of a character displaying that character trait

Character Traits: Character Traits Yes/No Game will assist students to consolidate their understanding of character traits and expand their vocabulary.

The character trait kit consists of:

The pack entails the following activities for the popular fairy tales:

♥ Jack and the Beanstalk

To extend students further they can provide evidence for each character trait that they dab.

Your student will have so much with their bingo daubers! This activity is perfect to incorporate into your fairy tale unit and literacy centers!

Please see the preview to see a sample of each of the products. If you want a more detailed preview then click on the links at the top of the page of each individual product.

Please rate my product when you get a chance. Your feedback is greatly appreciated. I hope you enjoy this great package deal!

This Character Trait Bundle is also included in the literacy bundle below.

Total Pages
700+ pages
Answer Key
Included
Teaching Duration
N/A
Report this Resource to TpT
Reported resources will be reviewed by our team. Report this resource to let us know if this resource violates TpT’s content guidelines.