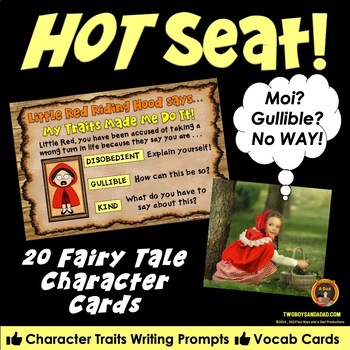 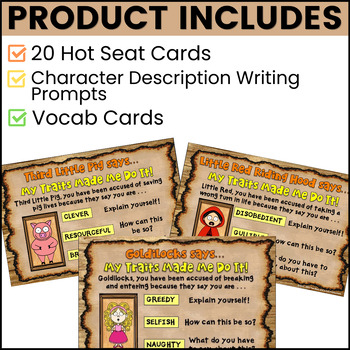 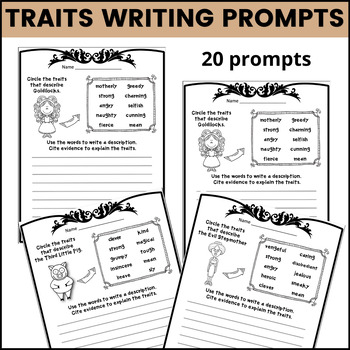 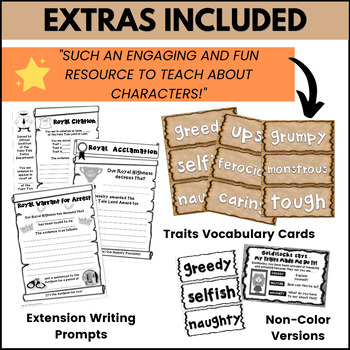 Working in small groups (or whole class), one student assumes the identity of the fairy tale character. The other students use the card to take turns to accuse the character of a trait. The student in the Hot Seat answers back in character citing evidence from the story or text. Students will have a blast impersonating a well known fairy tale character while developing a better understanding of character traits.

Another engaging activity to reinforce the importance of character traits are the Royal Posters.

Use these selfie portraits to match characters with the character traits on the vocabulary cards. Or attach a craft stick and use as face masks for the Hot Seat activity.

All of the character traits of the 20 fairy tale characters are included on the vocabulary cards. They can be used for discussion of definitions, matching to characters, games, centers or any other vocabulary development activity.

All student writing pages are in black and white. Hot Seat cards are in color and are meant to be printed out on card stock, laminated and then used.

The resource includes blank templates so that you can make your own Hot Seat Cards and your own Character Description Writing pages.

The 20 Fairy Tale Characters are from these Fairy Tales:

♦ Do you need some fresh ideas and tips? Then visit My BLOG

♦ If you have any questions or concerns, go ahead and contact me through the Q & A and I’ll get back to you ASAP!