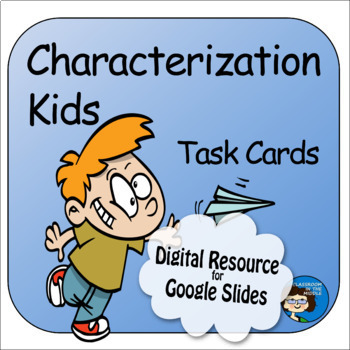 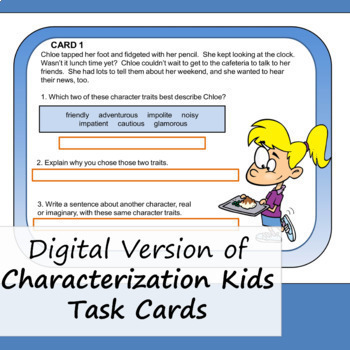 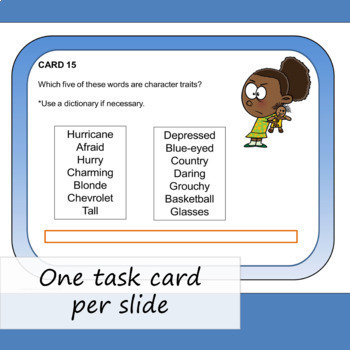 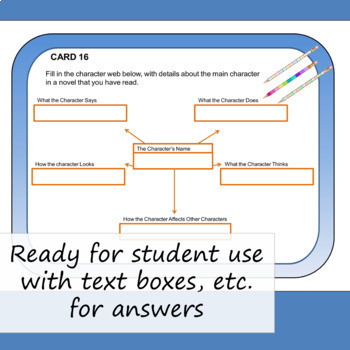 Classroom in the Middle
2.7k Followers
Follow
Made for Google Drive™
This resource can be used by students on Google Drive or Google Classroom. To access this resource, you’ll need to allow TpT to add it to your Google Drive. See our FAQ and Privacy Policy for more information.
DescriptionStandards13Reviews4Q&A1

More fromClassroom in the Middle

Characterization Task Cards Digital Resource for Google Slides - this set of thirty digital task cards helps students understand the meaning of the story element characterization and use close reading to identify character traits. Both the digital resource and a PDF version are included in this file.

This resource includes both the digital slides with one card per slide and a PDF version with two cards per page for printing. The answer key will be found in the PDF, and there is also a list of suggestions for ways to use task cards and ways to differentiate for students of differing abilities. In addition, there is a blank answer sheet for students to use to write their responses.

This Google Slides version of the task cards is ready for student use with text boxes or movable pieces already in place for student responses.

The text in this resource is not editable.

These task cards are designed specifically for middle grade kids with more content per card than many task cards –perfect for older kids who can handle more than one quick question per card.

The cards support the Reading: Literature standards, especially the standards regarding using text evidence to describe a character.

For more story elements and other comprehension skills, see the Reading Skills section of this store, and for even more task cards from Classroom in the Middle, see: Task Cards.

From Classroom in the Middle

Total Pages
51 pages
Answer Key
Included
Teaching Duration
90 minutes
Report this Resource to TpT
Reported resources will be reviewed by our team. Report this resource to let us know if this resource violates TpT’s content guidelines.

Log in
to see state-specific standards (only available in the US).
CCSSCCRA.R.10
Read and comprehend complex literary and informational texts independently and proficiently.
CCSSCCRA.R.3
Analyze how and why individuals, events, and ideas develop and interact over the course of a text.
CCSSCCRA.R.1
Read closely to determine what the text says explicitly and to make logical inferences from it; cite specific textual evidence when writing or speaking to support conclusions drawn from the text.
CCSSRL.7.10
By the end of the year, read and comprehend literature, including stories, dramas, and poems, in the grades 6–8 text complexity band proficiently, with scaffolding as needed at the high end of the range.
CCSSRL.7.1
Cite several pieces of textual evidence to support analysis of what the text says explicitly as well as inferences drawn from the text.

Classroom in the Middle