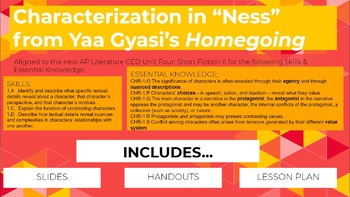 Aligned to the Skills and Essential Knowledge for Unit Four of the AP Literature CED, this lesson, slides, and handout will take your students through a reading of "Ness," a chapter from Homegoing by Yaa Gyasi.

Essential Knowledge:
CHR-1.O The significance of characters is often revealed through their agency and through nuanced descriptions.
CHR-1.P Characters’ choices—in speech, action, and inaction— reveal what they value.
CHR-1.Q The main character in a narrative is the protagonist; the antagonist in the narrative opposes the protagonist and may be another character, the internal conflicts of the protagonist, a collective (such as society), or nature.
CHR-1.R Protagonists and antagonists may present contrasting values.
CHR-1.S Conflict among characters often arises from tensions generated by their different value system

Secondary ELA with Ms Will

24 Followers
Follow
More products from Secondary ELA with Ms Will