Christmas Around the World Traditions with Printable Dress-Up Dolls 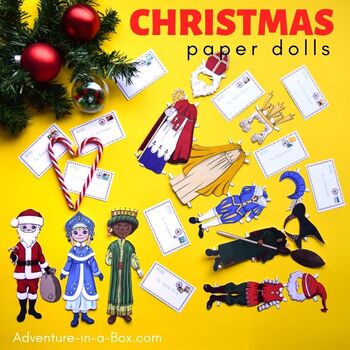 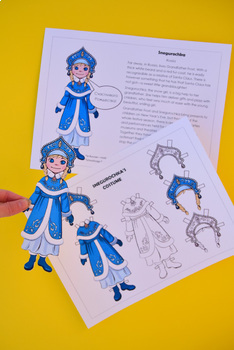 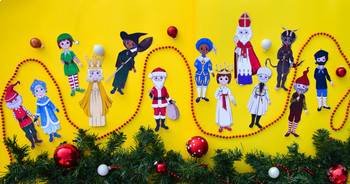 Adventure in a Box

125 Followers
Follow
More products from Adventure in a Box
$5.00
Digital Download
Report this resource to TpT
Also included in

Introduce children to Christmas traditions around the world with nineteen gift-bringing characters from different cultures! From the famed Santa Claus to the mysterious Olentzero, from the sweet Christkind to the horrifying Krampus—the world is full of interesting and unique traditions, associated with the season.

In places where the seasons are well defined and the winter months are cold, December often brings a celebration that revolves around a particular character who brings the festive spirit along with a bag of presents for children. Mostly they focus on the figure of a kind old man. In the USA and Canada, he is known as Santa Claus. In Europe, many countries celebrate his prototype, Saint Nicholas. In Slavic country, people wait for Father Frost, who also looks and behaves like Santa Claus. In Scandinavia, the gifts are brought by a gnome, and in Iceland, there is a jolly gang of trolls. But the list doesn’t end here. There are plenty of other unique gift-bringers!

Get to know nineteen gift-bringers from around the world! Besides Santa Claus and his loyal helper Christmas Elf, you will get to know Befana (Italy), Christkind (Austria, Switzerland, Germany and many other countries of Europe and South America), Three Kings (Spain, Mexico), Julenisse (Scandinavia), Knecht Ruprecht (Germany), Krampus (Austria, Germany, Croatia), Zwarte Piet (Netherlands), Olentzero (parts of Spain and France), Tió de Nadal (parts of Spain), Tante Arie (parts of France), Saint Lucia (Scandinavia and Italy), Saint Nicholas or Sinterklaas (Belgium, Netherlands, Germany and many other European countries), Grandfather Frost (Russia), Snegurochka (Russia), Chyskhaan (Russia), Tovlis Papa (Georgia), Uvlin Uvgun (Mongolia), and Yule Lads (Iceland). Each of them will tell you about a new tradition from their country.  If you like them, you can try some new traditions for yourself!

Christmas Around the World Pack Features:

Here are a few questions that may need answering before you decide how suitable this pack is for your class/homeschooling family.

Can I use this pack if my children still believe in Santa Claus?

Yes, as long as they would be alright with the knowledge that children in other countries get gifts from different characters. While some of the articles on gift-bringing characters briefly discuss their roots, the fact that parents play their roles in the modern world has been tactfully omitted. If your children already know that, they will understand. If they don’t, the articles shouldn’t reveal any secrets.

Is this pack religiously-oriented or secular-oriented?

Neither. This material objectively presents the traditions in different cultures without much examination of the belief-systems behind them. Many gift-bringers came from Christian traditions (Christkind, Saint Nicholas, Saint Lucia, and, surprisingly, Befana), while others have pagan or secular origins (Yule Lad, Julnisse, Snow Maiden).

Do all these characters come at Christmas time?

Thereabouts. As you meet different characters, you will find out that not all of them come on Christmas day, though. Sinterklaas comes on his own day, December 6, but for those countries who celebrate him, this is the beginning of the seasonal winter celebrations. Tovlis Papa, from Georgia, behaves in many ways like Santa Claus and brings gifts for children, but he actually comes on New Year’s Eve. Befana is even known to sneak into houses through a chimney to leave her gifts, but she comes on the day of Epiphany (January 6), which concludes the holiday celebrations in Italy.

Whenever these characters come though, they add to the festive spirit of winter celebrations. And if you get into the spirit of Christmas around the world, you can hold your own celebrations of different characters. Have Krampus visit on December 6 or dress like Saint Lucia, with candles in your hair, on December 13.