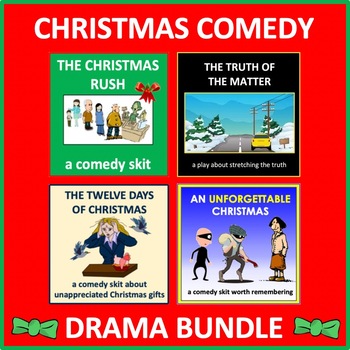 The Christmas Comedy Bundle is a collection of four original humorous plays that are suitable for the classroom or as a performance for a large audience. In "The Christmas Rush", many last-minute shoppers hit their frustration point as they wait in a checkout line at a store behind an easy-going, unhurried shopper, who holds them up with his unintentional delays. In "The Truth of the Matter", several characters pass along a story about a man, who slipped and fell while out collecting for the poor at Christmas. However, each embellishment of the story takes it farther and farther from the truth. In "The Twelve Days of Christmas", a young girl writes thank you notes to her true love for the gifts he sends each day, but over time, she gets less and less appreciative of what he sends. In "An Unforgettable Christmas", a woman who has lost her short-term memory due to a fall, is a witness to an attempted bank robbery. The humor builds as she interacts with other characters in the bank including the robbers and the police.

*SIGN UP AS A FOLLOWER OF “OFF THE PAGE” AND GET NOTIFICATIONS OF ANY SALES FROM OUR STORE AS WELL AS ALERTS OF NEW PRODUCTS.

Check out all the products from our store

You can also save $10.20 if you purchase the complete Bundle of games for only $19.50. This contains 56 games and over 1000 PowerPoint slides, more than enough activities for the entire year. Have fun!

The Truth of the Matter

The Twelve Days of Christmas

Log in to see state-specific standards (only available in the US).
CCSSCCRA.L.1
Demonstrate command of the conventions of standard English grammar and usage when writing or speaking.
CCSSCCRA.SL.5
Make strategic use of digital media and visual displays of data to express information and enhance understanding of presentations.
CCSSCCRA.SL.3
Evaluate a speaker’s point of view, reasoning, and use of evidence and rhetoric.
CCSSCCRA.R.3
Analyze how and why individuals, events, and ideas develop and interact over the course of a text.
CCSSCCRA.R.2
Determine central ideas or themes of a text and analyze their development; summarize the key supporting details and ideas.
Total Pages
25 pages and 12 audio files
Answer Key
N/A
Teaching Duration
2 Weeks
Report this Resource to TpT
Reported resources will be reviewed by our team. Report this resource to let us know if this resource violates TpT’s content guidelines.