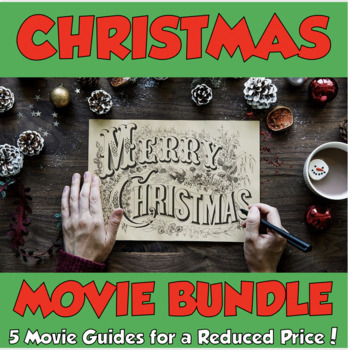 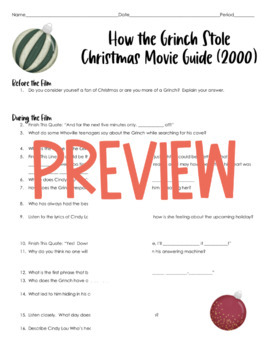 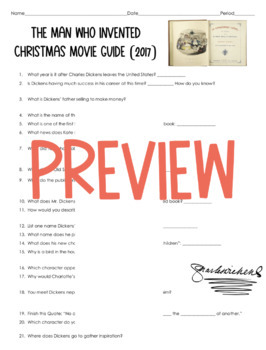 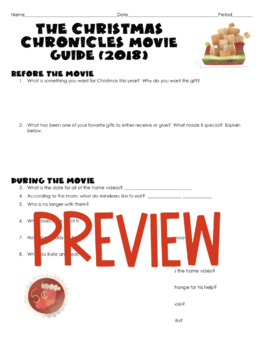 My Christmas Movie Guide Bundle contains 5 holiday films for a reduced price! The films included are Home Alone, The Man Who Invented Christmas, Netlfix's The Christmas Chronicles, Dr. Seuss' How the Grinch Stole Christmas, and Christmas with the Kranks! All of these films are for individual sale in my store if you would rather just purchase one film guide. Feel free to click on the above link to visit each individual guide. The bundle is a great deal if you are in need of a few movie guides for December!

Home Alone (1990) is John Hughes and Chris Columbus' tale of an eight year old boy and his adventures of basic survival and thwarting off robbers over the Christmas holiday. Kevin McCallister (Macaulay Culkin) is tired of his family and wishes he lived alone. By a twist of fate, that happens when he is accidentally left home alone while the rest of the family leaves for a trip to Paris. My movie guide contains 40 questions and an answer key has been provided for your convenience. This is one of my favorite Christmas movies and you might be like me and be able to answer all of the questions without looking at the answer key. :) The movie is 103 minutes in length and is rated PG. There is some mild language in the film. You can find a complete list on imdb.com under the parental guide if you would like to see more about the rating.

The Man Who Invented Christmas follows Charles Dickens' journey and experiences that led to his book, A Christmas Carol. His book went on to change the way we view Christmas and led to generosity among many. The movie stars Dan Stevens and Christopher Plummer. The movie guide has 40 questions and an answer key has been provided for your convenience. This film would be a wonderful addition to a Charles Dickens unit in literature class or a great film to show before Christmas Break. The film is rated PG for thematic elements and some mild language and the runtime is 104 minutes

The Christmas Chronicles is a 2018 Netflix release film that follows the story of two kids who are about to embark on their first Christmas without their father. After seeing something suspicious on a home video, Kate and Teddy Pierce are determined to catch Santa in the act of delivering gifts. Hijinx ensue and they spend the evening with Santa trying to save Christmas. This cute film starts Kurt Russell, Darby Camp, Judah Lewis, Oliver Hudson, Kimberly Williams-Paisley, Lamorne Morris, and a fun cameo that I will not ruin for you. :) My movie guide contains 50 questions and an answer key has been provided for you. The film runtime is 104 minutes and is rated PG. Please Note- There is mild language as the young girl almost says "sh**" but stops before saying it. There is also the word "hell" and "da** it". The sister also makes a joke about the brother drinking beer. As always, I recommend watching the film first to make sure it is okay for your students to view or to learn which part to bleep out. There are two questions to answer before the film and one after the film. I would allow for two hours for this activity.

Dr. Seuss' How the Grinch Stole Christmas is a great holiday film to use during a class party or celebration. The movie follows the story of the Grinch and his conflicting feelings with the jubilant people of Whoville. We see how the Grinch's heart changes with a little help from Cindy Lou Who. My movie guide contains 35 questions and an answer key has been provided for your convenience. The film runtime is 104 minutes and it is rated PG for some crude humor.

Christmas with the Kranks is the 2004 film based off of John Grisham's, Skipping Christmas. Tim Allen and Jamie Lee Curtis play a couple who decides to change things up for Christmas. Luther and Nora decide to skip Christmas and instead use the money they would have spent to go on a cruise. Many of their neighbors do not understand why they are skipping Christmas and they face backlash from the town. The town comes together when certain events start to change their mind about Christmas. My movie guide contains 40 questions and an answer key has been provided for your convenience. The movie is 99 minutes in length and is rated PG for brief language and suggestive content.

By purchasing this bundle, you agree to use it for your personal use only and will not share or post it online. Additional licenses are available for a reduced cost.