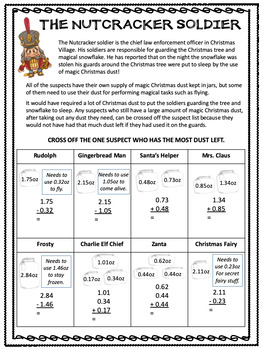 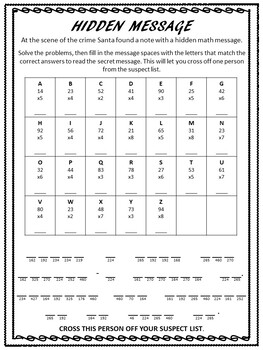 This Christmas and winter math activity bundle includes four CSI math activities. The digital versions of all the activities are included in this bundle.

This activity includes both a standard version and advanced version (with harder clues). The clues can be interchanged between the versions, allowing you to chose the version of the clue which best meets your students needs.

Students have to use their math skills to eliminate suspects so they can find out who committed the crime (Santa's sleigh was stolen!).

Four clues are given to the students and each clue (worksheet) allows them to eliminate 1-3 suspects.

Clue 2/ Magic to fly the sleigh

Pack also includes an extension writing activity for early finishers - What would you do if you had Santa's sleigh for a day?

In the advanced version the clues are slightly harder, allowing you to differentiate between your students.

Someone is transforming into the abominable snowman and creating havoc in the village! Students have to solve a series of math clues to find out who (which suspect) it is.

Throughout the adventure your students will need to solve a series of math problems until they have found out which suspect is the abominable snowman!

Math Puzzle 3/ Note on the door. (A graphing activity - 4 quadrants).

Math Puzzle 4/ Hidden castle in the forest. (Optional - can be included or taken out)

Math Puzzle 5/ The enchanted object. (Optional - can be included or taken out)

This product comes with an engaging video hook!

Students have to use their math skills to eliminate suspects so they can find out who stole the magical Christmas snowflake!

Not many people know this, but at the centre of Christmas Village is a magical Christmas tree and on top of this tree sits a large magical snowflake. This snowflake provides the magic for all of Christmas Village. It does everything from making Santa’s sleigh fly to powering the elves magical tools for toy making.

Yesterday, however, something terrible happened. The magical snowflake was stolen from the top of the Christmas tree. Now the magic is starting to leave Christmas Village. The elves can’t make toys anymore and soon Santa’s sleigh won’t be able to fly!

Five clues are given to the students and each clue (worksheet) allows them to eliminate 1-2 suspects.

There are also two extension activities which are optional but can be used with this mystery if desired.

Extension Clue 2/ Where was the snowflake hidden? (pre-algebra).

- What would you do if you had Santa's sleigh for a day?

Also include is a certificate template to give to your students once they have solved the mystery of the missing Christmas snowflake!