Civics! Learn About Our Government: A Bundle of Resources! 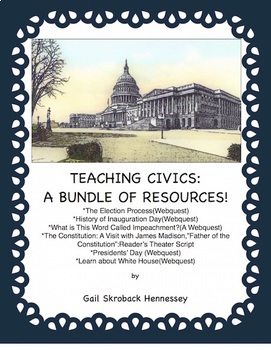 Gail Hennessey
1.4k Followers
Compatible with Digital Devices
The Teacher-Author has indicated that this resource can be used for device-based learning.

A BUNDLE OF RESOURCES!

1. The Election Process(Webquest):Teaching citizenship? Students will learn about the election process including requirements to run for office, requirements to vote, the Succession Act, the Electoral College and more. There are 12 web questions, a Did You Know? fact section and comprehension questions. The Teacher Page includes extension activities, the keys and additional links. The Election Process

What is this event in the USA called an "Inauguration"? Taking the oath of office, a big parade and evening balls, Inauguration Day is a very busy day for the incoming President! There are 10 web questions, a Did You Know? section, comprehension questions and extension activities. This resource would be a great activity for around Inauguration Day to learn all about the history and festivities surrounding our country's inauguration procedures. It could be used as a Friday activity or when you are studying US Government and for Presidents' Weekend.Inauguration Day: A Webquest

3. What is This Word Called Impeachment?(A Webquest): You may have heard the word IMPEACHMENT being used in the news. Some people are talking about impeachment and the 45th president of the United States, Donald Trump. What exactly is impeachment? In U.S. History, only two presidents have had charges of impeachment. Use this webquest to learn more about how the founding fathers determined the use of impeachment in the U.S. Constitution and the history of impeachment. There are 10 web questions on this topic(including the Order of Succession and the Checks and Balances between the three branches of government). There is also a short Did You Know? section and several comprehension questions. The Teacher Page includes the key and several extension activities, Impeachment: What is this Word? A Webquest

President Andrew Johnson had a pet white mouse. President William McKinley had a pet parrot who was trained to whistle, "Yankee Doodle". President James Garfield was the first president to be left- handed AND could write with both hands(and different languages at the same time-Greek and Latin). George H W Bush liked eating pork rinds as a snack. President George Washington was a spelunker, a person that likes searching in caves. John F. Kennedy said, “And so, my fellow Americans, ask not what your country can do for you, ask what you can do for your country.” Use this presidential webquest to learn more about our presidents!Presidential Webquest">< /a>

Click on the links to see previews of each resource.