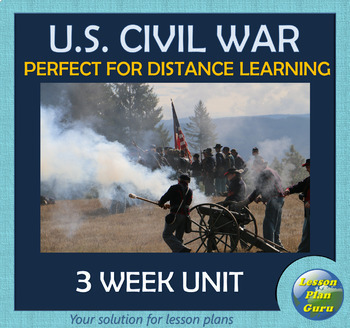 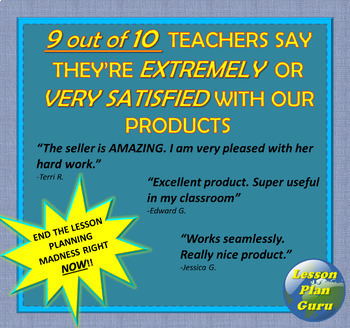 The Civil War Unit includes EVERYTHING you'll need and is PERFECT FOR ONLINE DISTANCE LEARNING with Google Apps!! From topics like secession, to the Border States, to the Emancipation Proclamation, and the major battles of the Civil War, and a whole lot MORE, this Civil War lesson plan unit has it covered!

ALL of the resources included in COMPLETE Civil War Unit come in both PDF format and 100% DIGITAL FORMAT via Google Drive/Google Apps!!

The Civil War Lesson Plan Unit is guaranteed to engage and challenge your students critical thinking skills through the use of numerous thought-provoking discussion-based questions (DBQ) built into the PowerPoint and Google Slides presentations. In addition to everything else, you'll receive links to 16 short YouTube videos that supplement several lessons in this unit!

All of the awesome resources you'll receive:

--26 student exercise assignments, including 4 for unit review, ALL complete with teacher answer key

This unit is designed to last for at least 15 classroom periods and can EASILY be stretched out into several more. The resources in this unit have been used with 5th, 6th, 7th, & 8th graders with great success!

You’ll Receive everything you need to cover these topics:

--Which states seceded and joined the Confederacy

--Loyalty to Country, or State?

Major Battles of the Civil War

--Battle of Vicksburg, and more!

Regiments of the Civil War

--The meaning of regiment

--The 3 regiments during the Civil War: Artillery, Cavalry, & Infantry

--What a draft is and how and why governments use them

--Impact of laws that allowed men to avoid the draft

--Which wars the U.S. has used a draft during

--How each played a major role in the Civil War

--Advantages and disadvantages for each of the 4 forms of transportation

--Causes and effects of the Emancipation Proclamation

--Examination of the election's results

--Significance of the 13th Amendment to the Constitution

--How the 13th Amendment differed from the Emancipation Proclamation

--Plot to wipe out the Union government

--Numerous maps to better convey to students the importance of geography and terrain during the Civil War, as well as, where battles took place

Plus much, MUCH MORE!!

If you have any questions about this product, PLEASE don’t hesitate to reach out to me directly at jillian@lessonplanguru.com

Thank you for visiting

Log in
to see state-specific standards (only available in the US).
CCSSRH.6-8.10
By the end of grade 8, read and comprehend history/social studies texts in the grades 6–8 text complexity band independently and proficiently.
CCSSRH.6-8.9
Analyze the relationship between a primary and secondary source on the same topic.
CCSSRH.6-8.8
Distinguish among fact, opinion, and reasoned judgment in a text.
CCSSRH.6-8.7
Integrate visual information (e.g., in charts, graphs, photographs, videos, or maps) with other information in print and digital texts.
CCSSRH.6-8.6
Identify aspects of a text that reveal an author’s point of view or purpose (e.g., loaded language, inclusion or avoidance of particular facts).
Total Pages
225+ slides in PowerPoint (PPT) & Google Slides formats
Answer Key
Included with rubric
Teaching Duration
3 Weeks
Report this Resource to TpT
Reported resources will be reviewed by our team. Report this resource to let us know if this resource violates TpT’s content guidelines.