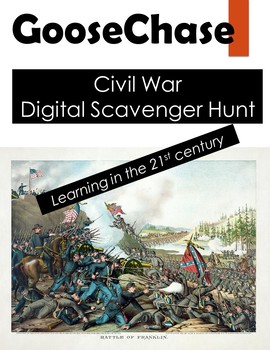 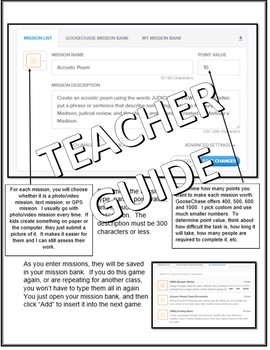 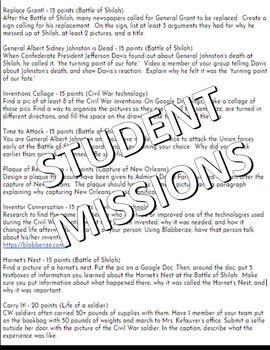 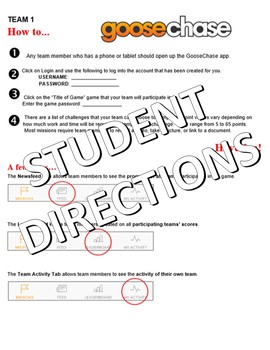 In this interactive, digital scavenger hunt, students are able to choose from 60 missions with different difficulty levels and point values all related to different events of the American Civil War. In a classroom with many different learning styles and needs, GooseChase is one of the most exciting, engaging ways to differentiate for all students. Students submit their completed tasks by taking pictures or videos through the GooseChase app on a mobile phone.

Students explore a variety of topics including:

- War Erupts - Ft. Sumter, First Battle of Bull Run, and the strengths, weaknesses, and strategies of each side going into the war.

- War Wages On - Life of a soldier, Civil War technology, prison camps, medical care, and the Battles of Shiloh, New Orleans and Antietam

- Coming to an End - Battle of Gettysburg, Siege of Vicksburg, Sherman's total war in Georgia, and surrender at Appomattox

During the scavenger hunt, they listen to Civil War songs and analyze the meaning, re-create the Star Spangled Banner as if it was written at Ft. Sumter, defend decisions made by generals during specific battles, write from the perspective of a draft wheel, as well as many other engaging activities to apply what they have learned.

* Detailed instructions for how to sign up for an account on GooseChase, create a game, and run the game with your students.

* 60 missions that you can choose from when creating your game.

* A list of websites students can use as resources as they learn about the Civil War. The list of missions and websites are on a Google Doc that can be edited, shared with students directly, or put onto Google Classroom.

GooseChase is one of the my students' favorite activities. I have used it in the classroom to review material as well as a way for students to learn new information. We have also used GooseChase during class field trips. My principal has even used GooseChase for staff development. I cannot recommend any program more than GooseChase; it is definitely a staff and student favorite!