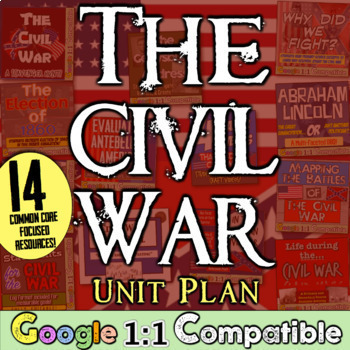 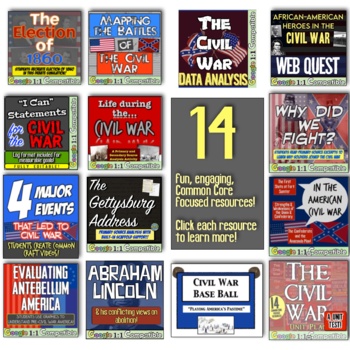 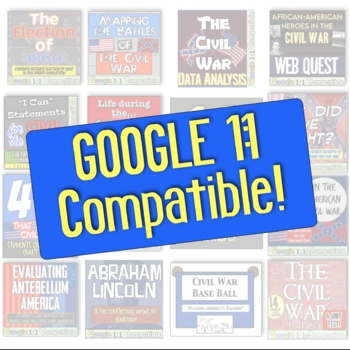 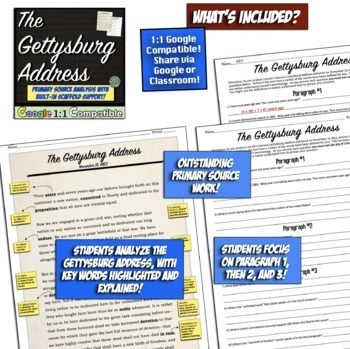 This Civil War Unit includes 14 Civil War resources and activities including Civil War Battles, Causes of the Civil War, the impact of Abraham Lincoln, the Gettysburg Address, and much more! Instead of paying over $50 for each Civil War resource separately, buy my Civil War unit and enjoy a savings of over 35%!

This unit includes paper in-class versions and 1:1 Google compatible versions (to be used in conjunction with Google Classroom) for the vast majority of resources. Just follow the included instructions for how to access the Google version, then share the resource through Google or assign via Google Classroom. This will allow students to type directly into the document!

✔ 2.) Evaluating Antebellum America: Analyzing Maps and Graphs in Pre-Civil War America This lesson serves as an outstanding integration of mathematics into Social Studies. Here, students interact with math/data websites as they analyze what antebellum America looked like before the war. Students learn about manufacturing, agricultural production, and the workforce (plus many others) in both the North and South.

✔ 3.) Election of 1860 Matrix and Electoral Map Activity: A Precursor to the Civil War! Students complete a 4-person matrix to understand the experience and views of Abraham Lincoln, Stephen Douglas, John Breckinridge, and John Bell in the Election of 1860. Then, complete an electoral map activity to see how the United States voted in this pivotal election.

✔ 4.) The Civil War: Data Analysis! What were the odds of being killed in battle? What about dying of disease? What was the bloodiest day in American history? Students navigate the room analyzing data to learn about Civil War destruction.

✔ 5.) The American Civil War: Strengths, Weaknesses, and the Game Plan of Both Sides! The War begins! Students learn about the firing at Fort Sumter, the strategies of both sides, and how both sides stack up with a PowerPoint, guided notes, and video!

✔ 6.) Why Did We Fight? Exploring the Reasons for Fighting the Civil War Read 8 (very brief) accounts of why soldiers joined to fight in the Civil War.

✔ 11.) Civil War Base Ball: Playing America's Pastime! Enjoy a day outdoors as your class plays the baseball game that was invented to pass the time during the Civil War. Super fun!

✔ 12.) Abraham Lincoln DBQ: What were his views on abolition? Watch as students see the evolution of Abraham Lincoln and his views on slavery. Students begin understanding Lincoln just prior to being elected in 1860, then analyze a variety of primary source text to see how his thinking evolved.

✔ 14.) Civil War "I Can" Statements & Learning Goals! Posters and Log for Civil War! Use the log and I Can Statements to chart student progress, learning, and growth. Keep students accountable with this resource that spans the entire unit.

Looking for more resources focused on the buildup to the Civil War? If so, check out the Sectionalism and Irreconcilable Period Bundle! This bundle includes resources on Dred Scott, Nat Turner, John Brown, and more!

Supplement the Civil War Unit with these awesome accessory resources:

Total Pages
190 pages
Answer Key
Included
Teaching Duration
2 months
Report this Resource to TpT
Reported resources will be reviewed by our team. Report this resource to let us know if this resource violates TpT’s content guidelines.

Log in
to see state-specific standards (only available in the US).
CCSSRH.6-8.1
Cite specific textual evidence to support analysis of primary and secondary sources.
CCSSRH.6-8.2
Determine the central ideas or information of a primary or secondary source; provide an accurate summary of the source distinct from prior knowledge or opinions.
CCSSRH.6-8.3
Identify key steps in a text’s description of a process related to history/social studies (e.g., how a bill becomes law, how interest rates are raised or lowered).
CCSSRH.6-8.4
Determine the meaning of words and phrases as they are used in a text, including vocabulary specific to domains related to history/social studies.
CCSSRH.6-8.5
Describe how a text presents information (e.g., sequentially, comparatively, causally).