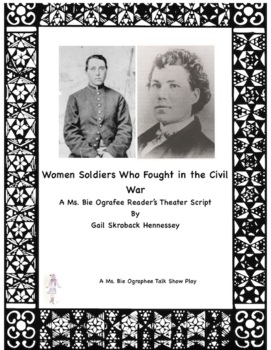 This resource has been revised for the TpT guidelines on slavery, civil rights and warfare.

It is estimated that approximately 400-700 WOMEN fought as soldiers during all the major battles of the Civil War.(1861-1865) Since females were not allowed to fight in battles at that time, those women that did become soldiers disguised themselves as men! This Ms. Bie Ografee Talk Show Reader’s Theater Script has three historians share information on this topic. Actual females who fought in the Civil War included Sarah Rosetta Wakeman, Sarah Emma Edmonds, Amy Clarke and Mary Galloway. they are mentioned in the play.The format is a talk show host with a studio audience who get to ask questions of the “guests”. There is also a Did You Know? section of facts on the Civil War, Comprehension Questions and a teacher page with extension activities, additional links of interest and the key to the comprehension questions.