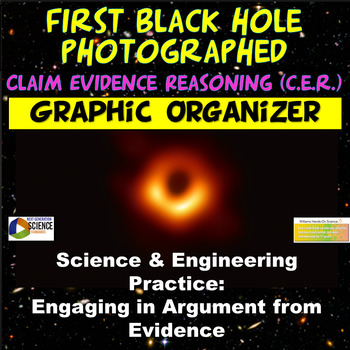 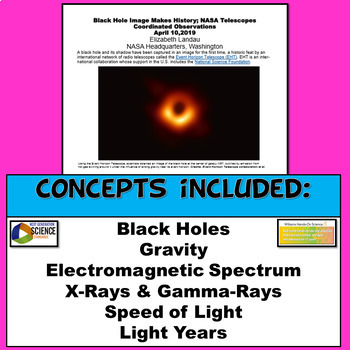 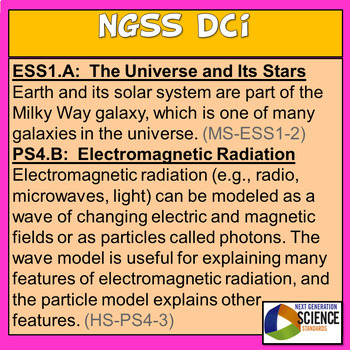 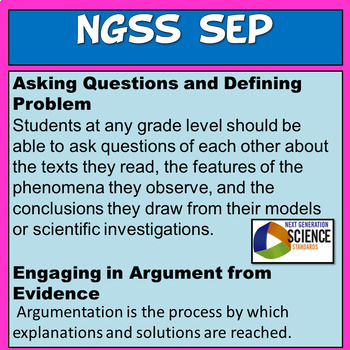 Students learn how the first photograph of a black hole was made through a C.E.R. (Claim Evidence Reasoning) graphic organizer. This is great for getting your students to explain phenomena in a meaningful way and it allows you as the instructor to adequately assess their understanding of concepts. The students figure out what the "Claim" is in the article, they then use data that supports the claim in the "Evidence" section, draw visual evidence and then explain why the evidence supports the claim in the "Reasoning" section.

The article has the following concepts:

This is great for a current event, sub plan, homework, critical thinking, scaffolding and/or reinforcement of concepts!

You get a CER graphic organizer, the key, an editable key, the article, tips for CER and the link to the website in the article.

Save money and buy my CER Growing Resource Bundle with 25+ articles and growing.

ESS1.A:  The Universe and Its Stars

Earth and its solar system are part of the Milky Way galaxy, which is one of many galaxies in the universe. (MS-ESS1-2)

Students at any grade level should be able to ask questions of each other about the texts they read, the features of the phenomena they observe, and the conclusions they draw from their models or scientific investigations.

Engaging in Argument from Evidence:

In 9–12 builds on K–8 experiences and progresses to using appropriate and sufficient evidence and scientific reasoning to defend and critique claims and explanations about the natural and designed world(s). Arguments may also come from current scientific or historical episodes in science.

Observed patterns of forms and events guide organization and classification, and they prompt questions about relationships and the factors that influence them.

Thank you for taking a look!

Please follow me on TpT for new products and check me out on Instagram for my products in action!

Total Pages
7 pages
Answer Key
Included
Teaching Duration
40 minutes
Report this Resource to TpT
Reported resources will be reviewed by our team. Report this resource to let us know if this resource violates TpT’s content guidelines.