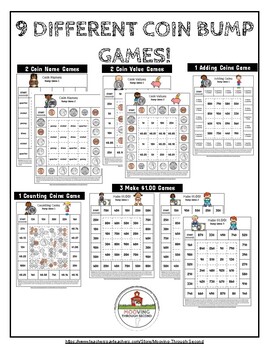 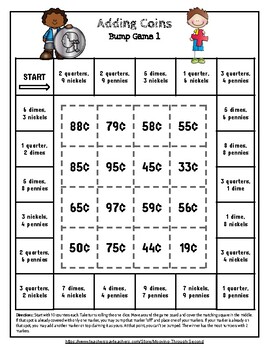 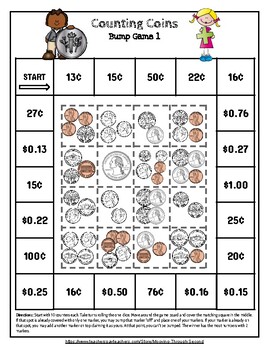 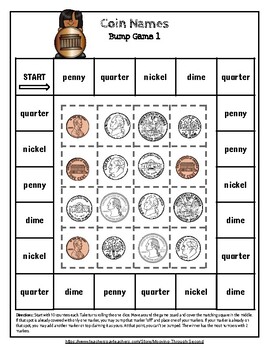 Just print and play (no cutting involved!). The only other materials required for play are two different colored counters and 1 dice.

In this product you will find:

Other materials you will need:

Objective: To be the first person to have all of his/her counters placed onto the center spaces on the game board.

There are 2 “Make One Dollar” bump games included in this set. In this game, a player reads the value of the space that he/she just landed on and has to find a space in the middle that could be added to that value to make one dollar. For example, if a player landed on 38¢, he/she would need to cover the 62¢ space in the middle of the board because 38¢ and 62¢ equals one dollar.

Log in to see state-specific standards (only available in the US).
CCSS2.MD.C.8
Solve word problems involving dollar bills, quarters, dimes, nickels, and pennies, using $ and ¢ symbols appropriately. Example: If you have 2 dimes and 3 pennies, how many cents do you have?
Total Pages
12 pages
Answer Key
N/A
Teaching Duration
N/A
Report this Resource to TpT
Reported resources will be reviewed by our team. Report this resource to let us know if this resource violates TpT’s content guidelines.