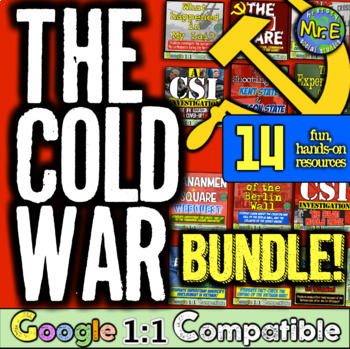 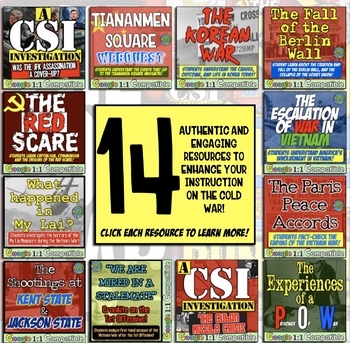 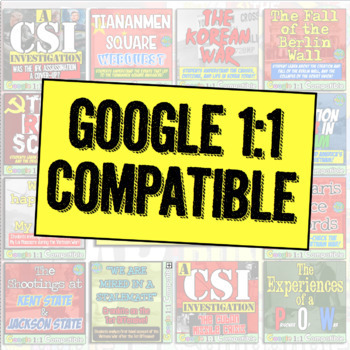 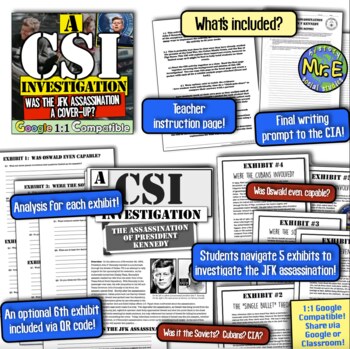 Students will understand the major events, themes, and intricacies of the Cold War through a variety of hands-on and engaging resources.

In this Cold War Unit Bundle, you receive 12 hands-on, engaging, and Google 1:1 compatible resources on the Cold War to enhance your instruction on the conflict between the United States and the Soviet Union. Purchase this unit bundle and save significantly over purchasing each resource separately.

In this bundle, you are receive the following 14 resources:

✔ 6.) My Lai Massacre: What Happened in My Lai? Students investigate the massacre!

✔ 7.) Prisoners of War during the Vietnam War: What did POWs experience? Engaging!

✔ 10.) Fact-Checking the Paris Peace Accords! Analyzing the End of the Vietnam War!

✔ 13.) Cold War "I Can" Statements Posters and Learning Goal Log

Each resource has been tried, tested, and perfected to engage student interest and increase productivity. Plus, Google 1:1 compatible versions are included in each lesson in this bundle! Use in either a traditional setting or in the 1:1 environment!

Looking for additional supplements on the Cold War? Be sure to check out...

✰ Guided Notes and PowerPoint on the Cold War in Asia

Buy Super Unit Version 6 and receive an additional 10% off!

Log in to see state-specific standards (only available in the US).
CCSSRH.9-10.10
By the end of grade 10, read and comprehend history/social studies texts in the grades 9–10 text complexity band independently and proficiently.
CCSSRH.9-10.9
Compare and contrast treatments of the same topic in several primary and secondary sources.
CCSSRH.9-10.8
Assess the extent to which the reasoning and evidence in a text support the author’s claims.
CCSSRH.9-10.7
Integrate quantitative or technical analysis (e.g., charts, research data) with qualitative analysis in print or digital text.
CCSSRH.9-10.6
Compare the point of view of two or more authors for how they treat the same or similar topics, including which details they include and emphasize in their respective accounts.
Total Pages
235 pages
Answer Key
Included
Teaching Duration
1 month
Report this Resource to TpT
Reported resources will be reviewed by our team. Report this resource to let us know if this resource violates TpT’s content guidelines.