Comma conspiracy clouds and construes the US 2nd Amendment, so SCOTUS… 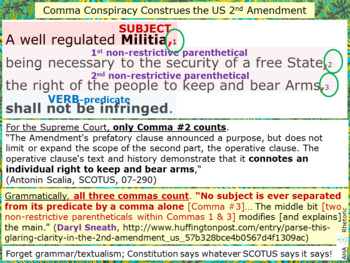 A well-regulated language, being necessary to the collective wisdom of our country, the right of the Supreme Court to interpret and abuse commas, shall not be infringed. District of Columbia et alia vs Keller 2008 considered 2nd amendment grammar, and this animated GIF looks at two interpretations of that grammar.

This PPT-size animated GIF (3-frame, 7-seconds each, continuously looping) can be used as a PPT slide that animates when in slide-show mode or as a bell-ringer for classes about grammar, essay writing, social studies, or even constitutional law! Image size 960×720 (file size 471 KB). Note: You can pause an animated GIF during a PowerPoint Slide Show by Right-Clicking your mouse and later resume animation with a Left-Click. This mouse-trick works in PPT 2010, but other PPT versions may work differently. Suggested alt-text (100 characters) for image: Supreme Court sees only 2nd comma in 2nd amendment; 3-comma grammar says: don’t infringe the militia

To learn how to make such animated GIFs using PowerPoint and a free online AGIF maker, see PowerPoint slide show Animated GIFs—How to Make and Use.