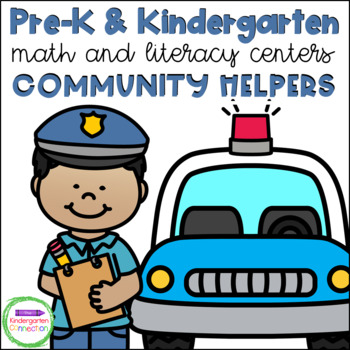 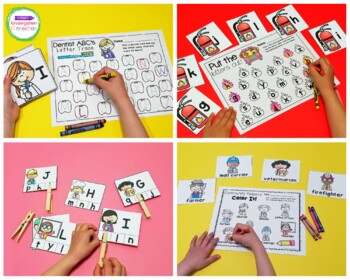 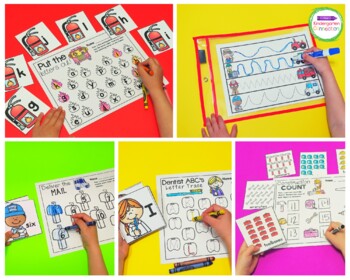 Looking for Pre-K, Transitional Kindergarten, or Kindergarten centers? These are for you! Designed with Pre-K, TK, and Kindergarten in mind, these centers will give you a variety of activities and options for your students.

This pack is filled with engaging math and literacy centers with a Community Helpers theme.

***This pack is also available in a money saving BUNDLE***

Alphabet Clip Cards - Read the letter on the cards and clip the matching letter. Upper to Uppercase and Upper to Lowercase matches included.

“Who is a Community Helper?” Emergent Reader (2 levels) - print a simple label style version, or one with a predictable sentence pattern. Copy two-sided and cut in half for two books!

Police Officer Alphabet Puzzles - Match the police officers to their badges. Both upper and lowercase versions included (can also mix and match).

Put the Letters Out!- Pick a fire extinguisher card and say the letter name. Find and color the matching letter on the flames. Both upper and lowercase versions included.

Pre-Writing Tracing Strips - Trace the lines from the community helpers to their vehicles. Can laminate and use with a dry erase marker, or use black and white copies for tracing/pre-writing pencil practice.

Stop for Sight Words (Editable) - Pick a fire truck sight word. Read the word and write it on a stop sign.

Dentist ABC’s – Pick a dentist card and say the letter name. Find and trace its match! Both upper and lowercase versions included.

Community Helpers Write It (Write the Room) – Pick a card (community helper). Find and record the word next to its matching picture on the recording sheet.

*Second version included with dots in a scatter formation for subitizing practice.

Construction Count (2 levels) – Pick a card and count the objects. Record how many of each object in the boxes. Can play with numbers 1-10 or 11-20.

Counting Cupcakes (2 levels) – Pick a baker card and read the number. Color the cupcake with the matching ten or twenty frame.

Deliver the Mail (2 levels) – Pick a card and read the number or number word. Color the mailbox that matches (numbers and number words to 10.)

Police Officer Addition – Pick a card and solve the addition problem. Record the problem in the boxes below. (addition to 10).

Police Officer Subtraction – Pick a card and solve the subtraction problem. Record the problem in the boxes below (subtraction within 5).

Community Helper Roll and Graph – Roll the die. Color a space above the community helper you roll on the graph below. See which one gets to the top first!

*Inserts included if you use your own plastic sleeve dice.

Black and White Copies of color items are included at the end of the file.