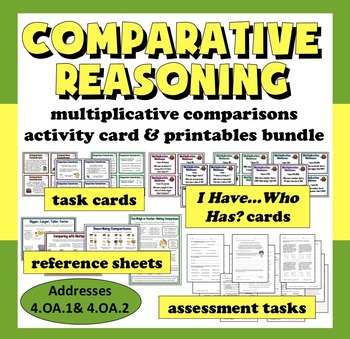 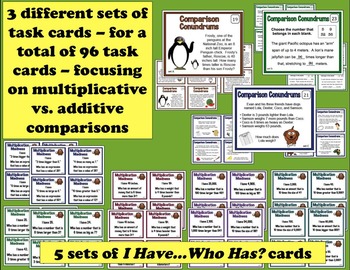 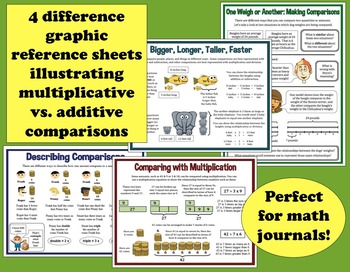 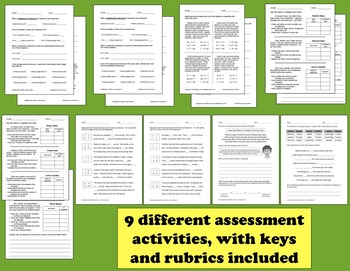 Students begin to develop their ability to reason comparatively in elementary school, learning to distinguish between multiplicative comparisons (21 is 3 times as big as 7) and additive comparisons (21 is 3 greater than 18), and such reasoning underlies the work with algebra and ratio & proportion that they will be doing in middle school and beyond. This bundle of resources – which includes 3 sets of task cards, 5 sets of I Have…Who Has? cards, 4 reference sheets, and 9 different assessment activities – is everything you need (and then some!) to build, reinforce, and assess your students’ ability to reason comparatively, laying a strong foundation for future mathematical success.

Purchasing this bundle will save you 20% compared to buying the individual products separately – and you’ll receive 2 bonus sets of I Have…Who Has? cards that are only available in this bundle.

This product is a ZIP file containing five PDF s. For directions about how to “unzip” the files, TpT provides instructions here.

There are five full sets of 32 “I Have, Who Has?” cards, with each set of 32 cards labeled as Set A through Set E. Included with the cards is a master list (identified as matching Set A, Set B, Set C, etc.) of all the questions and answers on each of the cards. If you want to follow along with the students, you can have the student with that card begin, and use the master list to keep track of what card will be up next in case a student needs a hint.

There are 32 cards to accommodate large classes. You can still use the entire set even if you don’t have 32 students by having some students hold two cards at once. However, if you much fewer than 32 students and you want to get more use out of each set, I have included a pair of “half-sets” for each set of 32 cards. These half-sets contain 16 cards and are identified as Set A1, Set A2, Set B1, Set B2, and so on. They have the exact same numbers and expressions from the original sets of 32, but they are split into two groups and have their “ending” cards altered so that the 16th card loops back to the 1st card and the 32nd card loops back to the 17th card.

The printables consist of a graphic reference sheet and two assessment activities. Have the students glue the reference sheet across two pages in their journal, or fold it in half and glue down on one page, allowing them to fold it open and read it. The assessment activities can be used to assess your students’ understanding of multiplicative comparisons. They are formatted similarly but use different numbers.

The printables consist of a graphic reference sheet and a two-page assessment activity that can be used to evaluate student understanding of interpreting story problems. The reference sheet describes the difference between additive and multiplicative comparisons, using graphics to illustrate a situation in which addition or subtraction would be used to compare and a different situation in which multiplication or division would be used. You can give this to the students before they work on the cards and allow the students to use the sheet as a reference while they complete the cards.

The cards in this set present “number stories” – sets of sentences that give facts about the animal kingdom, describing one animal’s attributes, such as weight, height, or number of teeth, in relation to those of another animal. In each story, one or more of the numbers have been removed, and the students are asked to use context clues to figure out the missing numbers, choosing among four numbers provided in a number bank. Some of the comparisons are multiplicative and some are additive, and since the numbers provided in the number bank were chosen to reflect both types of comparisons, it will take some thoughtful reasoning for your students to figure out which numbers fit the story and which do not. In addition, your students will be called upon to use all four operations as they work through the cards.

The majority of the cards use single digit factors/addends and double-digit products/sums, while a couple cards use sets of numbers that involve multiples of 10 (e.g., 30, 5, and 150). Since the numbers lend themselves to mental computation, your students can focus on the relationship between the numbers in each story rather than the process of multiplying, dividing, adding, and subtracting. The first 16 cards present stories with only one missing number, and the second 16 cards up the challenge level by requiring students to identify two missing numbers.

The included reference sheet presents situations, claims, and models related to multiplicative and additive comparisons, as well as some questions directed at the students aimed at pushing them to reason about multiplicative and additive situations. I designed this resource not as a standard reference sheet with rules and procedures, but as an interactive tool, providing a springboard for a class discussion and some journal writing about comparative situations.

The four provided activity sheets can be used to evaluate student understanding of multiplicative vs. additive comparisons. Two of the activities to be similar to the cards, presenting “context clue” stories that require students to select numbers from a number bank to place in blanks in the stories. These sheets are formatted similarly, and have similar types of questions, though the numbers on each are different.

The 32 task cards in this set (provided in both color and grayscale since each card features graphics) each present students with a logic problem and asks students to interpret a series of clues to find a specific amount. The clues use a mixture of additive and multiplicative comparisons, requiring students to read carefully to determine whether they need to add/subtract or multiply/divide when interpreting the clues.

The cards scale up in difficulty, allowing students to see success early on and build the strategies and confidence needed to tackle the more complex problems on the later cards. The first 12 cards present problems with 3 clues, the second 12 have four clues, and the final 8 cards have problems with 5 clues. Most of the cards limit the comparisons to single-digit numbers as both factors (or addends), with some the higher-numbered cards adding in the numbers 10, 11, and 12. All the cards follow the same basic format - the first two to four clues describe the relationships between given amounts (weights of dogs, amount of money saved, etc.), the final clue tells the student one of the amounts, and the students are asked a question about a “target amount”. The students then need to go back through the clues, reasoning from one amount to the next, until they are able to figure out the target amount. The cards use varied language when describing the comparative relationships– “fewer than”, “___ times as heavy”, “double”, “more than”, “triple”, etc. – as a means to provide practice with the vocabulary associated with such number relationships.

The printables consist of a graphic reference sheet and two different two-page assessment activities. The reference sheet illustrates different comparison – both additive and multiplicative, and describes those comparisons using a variety of academic vocabulary, including double, triple, and quadruple. I have often found that some of my fourth graders have trouble accurately using these terms (sometimes describing 32 as double 64, rather than the other way around), and so I made this to provide a regular reference for terms such as these. Your students can use the journal insert as a guide while they work on the cards, as well as when they complete other tasks that relate to multiplicative and additive comparisons.

The two assessment activities can be used to evaluate student understanding of interpreting statements of comparison. The activities have sets of logic problems similar to those on the task cards, and they are formatted in a like manner, with similar types of questions, though the numbers on each are different.


I hope your students enjoy these resources and are able to build their proficiency with comparative reasoning. – Dennis McDonald
Total Pages
102 pages
Answer Key
Included with rubric
Teaching Duration
N/A
Report this Resource to TpT
Reported resources will be reviewed by our team. Report this resource to let us know if this resource violates TpT’s content guidelines.