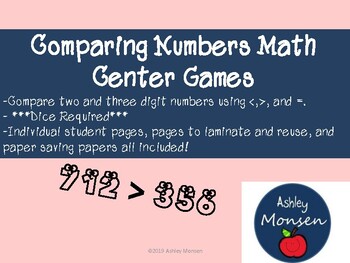 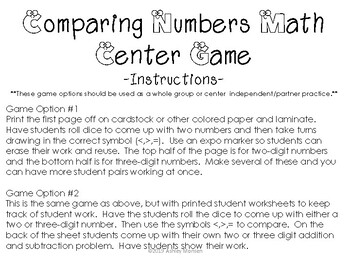 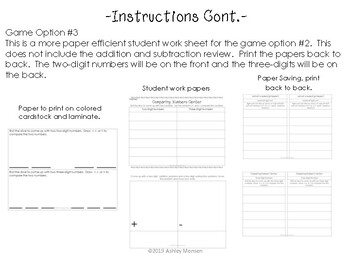 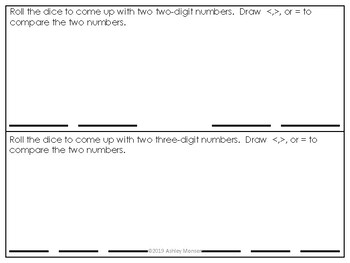 Ashley Monsen
2 Followers
Follow
Compatible with TpT Digital Activities
This PDF can be converted to an editable, interactive version that students can complete from any device on TpT’s new tool. Learn more.

Print the first page off on cardstock or other colored paper and laminate. Have students roll dice to come up with two numbers and then take turns drawing in the correct symbol (<,>,=). Use an expo marker so students can erase their work and reuse. The top half of the page is for two-digit numbers and the bottom half is for three-digit numbers. You could cut to separate and have some students do two-digit and some do three-digit numbers. Make several of these and you can have more student pairs working at once.

This is the same game as above, but with printed student worksheets to keep track of student work. Have the students roll the dice to come up with either a two or three-digit number. Then use the symbols <,>,= to compare. On the back of the sheet students come up with their own two or three digit addition and subtraction problem. Have students show their work. The benefit of this is that students have a paper to turn in.

This is a more paper efficient student work sheet for the game option #2. This does not include the addition and subtraction review. Print the papers back to back. The two-digit numbers will be on the front and the three-digits will be on the back.

Log in
to see state-specific standards (only available in the US).
CCSS2.NBT.B.5
Fluently add and subtract within 100 using strategies based on place value, properties of operations, and/or the relationship between addition and subtraction.
CCSS2.NBT.A.4
Compare two three-digit numbers based on meanings of the hundreds, tens, and ones digits, using >, =, and < symbols to record the results of comparisons.
CCSS2.NBT.A.3
Read and write numbers to 1000 using base-ten numerals, number names, and expanded form.
CCSS2.NBT.A.1
Understand that the three digits of a three-digit number represent amounts of hundreds, tens, and ones; e.g., 706 equals 7 hundreds, 0 tens, and 6 ones. Understand the following as special cases: