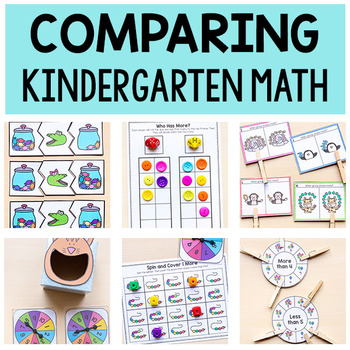 These comparing numbers math activities are perfect for your kindergarten math centers, but many of the activities can also be used in preschool and pre-k as well.

They are all fun, hands-on math activities and games that will keep your students engaged while learning so much!

Comparing Numbers Activities included in this pack are:

One More One Less Mats

Pirate One More One Less Board Game

Spin and Cover One More or One Less Mats

Check out all of the photos in the gallery above for an up-close look at the activities.

I know your students are going to have such a blast learning important math skills while having fun!

Tip: Instead of printing, cutting and laminating, you can use write and wipe pockets on the activities that allow for it. I slide the whole sheet into a write and wipe pocket and save myself lots of time. No need for cutting or laminating. This also gives kids the opportunity to use dry-erase markers on the pages – saving you on paper, ink, and time!

The printable activities are made in a way that limits the amount of cuts you need to make and the prep you need to do. I hope these comparing numbers activities save you lots of time!