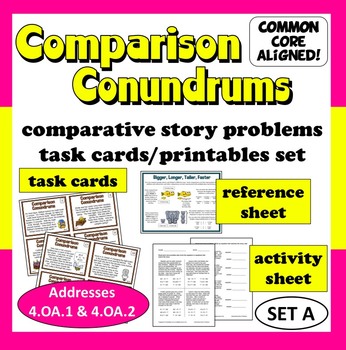 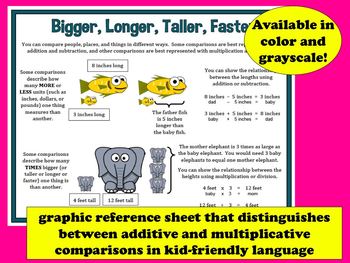 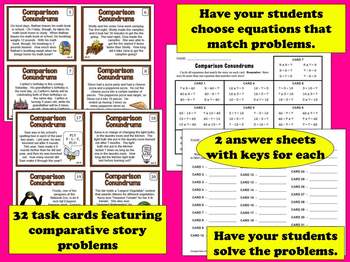 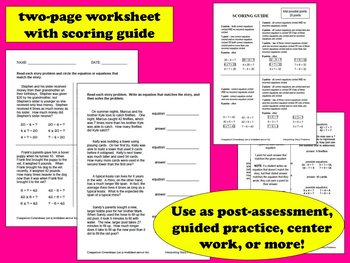 Build your students’ understanding of multiplicative and additive comparisons with this set of task cards and printables. The 32 task cards in this set will allow your students to practice distinguishing between story problems that are best represented with multiplication & division equations and ones that show the characteristics of addition & subtraction. Extend your students’ practice (or assess their mastery of interpreting comparative situations) with the included activity sheet. With these resources, your students will grow stronger in their understanding of a key concept that dominates the Grade 4 Common Core Math Standards for operations & algebraic thinking and lays the foundation for proportional reasoning.

NOTE: This set of resources is available in a money-saving bundle with three other products that focus on comparative reasoning. The bundle contains three different sets of task cards and printables, a set of five I Have…Who Has? and accompanying printables, and 2 bonus sets of I Have…Who Has? cards that are only available in the bundle. Purchase the bundle here and save 20% off the cost of the individual products!

The printables consist of a graphic reference sheet and a two-page activity sheet that can be used to evaluate student understanding of interpreting story problems. The reference sheet describes the difference between additive and multiplicative comparisons (though it does not use those exact terms as they are not exactly kid-friendly!), using graphics to illustrate a situation in which addition/subtraction would be used to compare and a different situation in which multiplication/division would be used. You can give this to the students before they work on the cards and allow the students to use the sheet as a reference while they complete the cards. Have the students glue it across two pages in their journal, or fold it in half and glue down on one page, allowing them to fold it open and read it.

Of the two answer sheets, the first one presents students with six equations, each using a question mark in place of the unknown. The students are asked to identify any and all equations that match the story problem on the card. In some cases, only one equation matches the given story, and in others as many as four equations match the story. This answer sheet focuses less on solving the problem than on thinking about ways in which it can be represented with multiplication, division, addition, or subtraction. Since there is not a set # of correct equations for each card, students will have to think carefully about the structure of the problem and also about the relationship between multiplication & division and addition & subtraction. The other answer sheet is more straightforward, simply asking the students to solve the problem on each card. You can use either or both of the answer sheets, depending on what skill you would like to emphasize. Your students may use the task cards initially to identify the equations that match the story, and then later use the same cards again to find the answer.

For more practice with multiplicative comparison, as well as other multiplication and division concepts, please check out the other related resources I have available –

I hope your students enjoy these resources and are able to build their proficiency with problem solving. – Dennis McDonald
Total Pages
15 pages
Answer Key
Included
Teaching Duration
N/A
Report this Resource to TpT
Reported resources will be reviewed by our team. Report this resource to let us know if this resource violates TpT’s content guidelines.