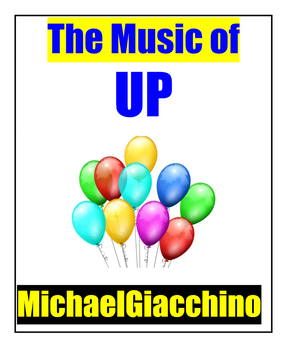 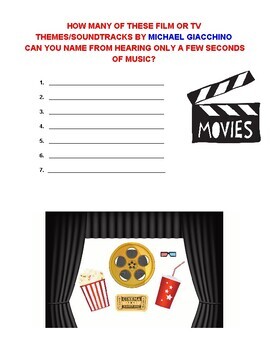 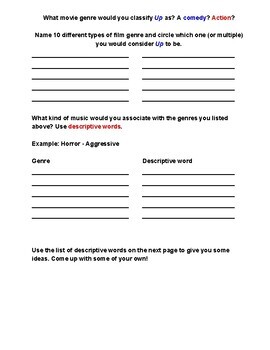 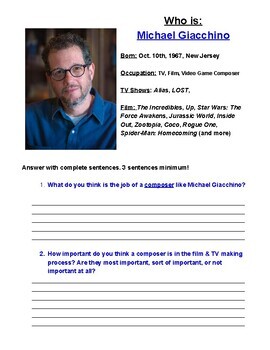 This lesson uses the opening scene from the 2009 Pixar movie Up to teach students about an important 20th and 21st century composer, Michael Giacchino.

A primary objective of this lesson is for students to learn to use descriptive words when talking about music.

(The Incredibles, Jurassic World, LOST, Inside Out, Up, Star Wars: The Force Awakens, Coco, and others). This gives students context as to who they will be talking about and that although they probably didn't know who he was, they did know his music undoubtedly.

Students will then start learning to use descriptive words (some starters are provided for them) to describe genre and music.

Eventually, the climax of the lesson is for students to watch the scene "Married Life", which can be easily found on YouTube and is attached in the lesson. This will go hand in hand with the descriptive words the students will be using as well as teaching them about Michael Giacchino and the job of a film composer.

My students always have a BLAST trying to name all of his movies just from hearing the music, as well as talking about the opening "Married Life" scene from Up and the powerful impact the music has on the film.

It really opens up the whole unit on film and television composers.

Total Pages
12 pages
Answer Key
Included
Teaching Duration
3 days
Report this Resource to TpT
Reported resources will be reviewed by our team. Report this resource to let us know if this resource violates TpT’s content guidelines.