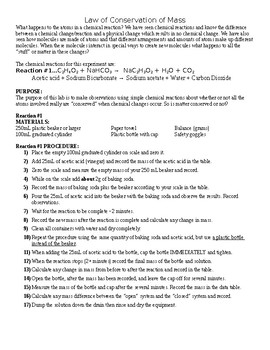 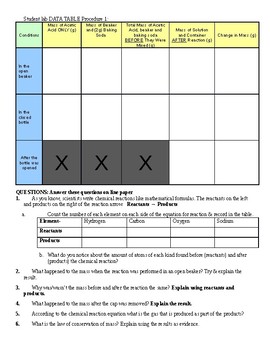 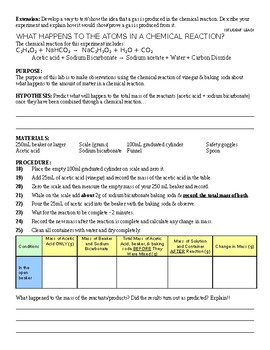 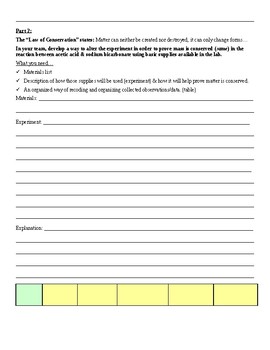 MS-PS1-5: Develop & use a model to describe how the total number of atoms does not change in a chemical reaction & thus mass is conserved.

Student lab sheet with procedure for testing how matter and thus mass is conserved in chemical reactions. Students will use the simple acid/base reaction of vinegar an baking soda to see if all matter is trapped that the matter, even after changing forms, will remain in the same quantity of matter/mass. Students first conduct the experiment in an open container measuring the mass of all components before and after the reaction in order to compare them. They then conduct the same reaction in a closed container and measure the mass to compare with the first test. The students will then need to determine why there was a difference in these reaction masses even though it was the same reaction using the same amount of reactants and answer additional questions relating to their observations.

Also included is a student lead version where the students design their own experiment within their teams for the second test after performing the first in an open container to prove if matter/mass would be conserved if they changed the testing parameters.

The version used will depend on the independence of your students.

Funnels- to use with water bottles

Safety glasses for each student

Total Pages
6 pages
Answer Key
Not Included
Teaching Duration
1 hour
Report this Resource to TpT
Reported resources will be reviewed by our team. Report this resource to let us know if this resource violates TpT’s content guidelines.