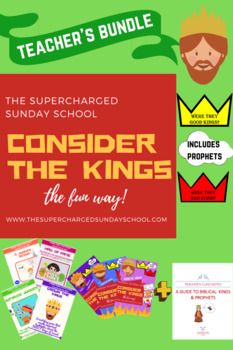 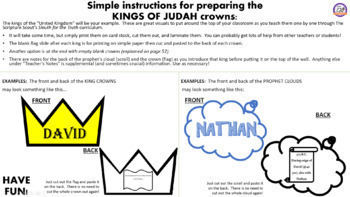 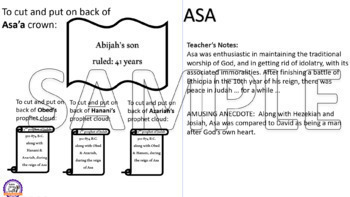 The king's crowns are great visuals to put around the top of your church classroom as you teach them one by one through The Scripture Scout’s SLEUTH FOR THE TRUTH curriculum but can be used with your own method of teaching the Bible kings of Israel, Judah and a United Kingdom. These pages/slides/cut-outs note whether it was a GOOD king (yellow/gold) or a BAD king (red). Some were a little of both ...

•Simply print them on card stock, cut them out, and laminate them. You can probably get lots of help from other teachers or students! (this is the best use)

•THE MAY ALSO BE USED AS A TWEAK-ABLE, but SIMPLE POWERPOINT.

•The blank flag slide after each king is for printing on simple paper then cut and pasted to the back of each crown.

•Another option is at the end with empty blank crowns (explained on page 54).

•There are notes for the back of the prophet’s cloud (scroll) and the crown (flag) as you introduce that king before putting it on the top of the wall. Anything else under “Teacher’s Notes” is supplemental (and sometimes crucial) information. Use as necessary!