Conversations with a Killer: The Ted Bundy Tapes (EPISODE 2 One of Us) 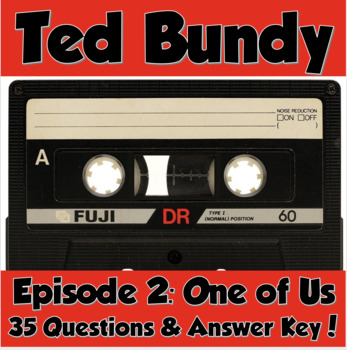 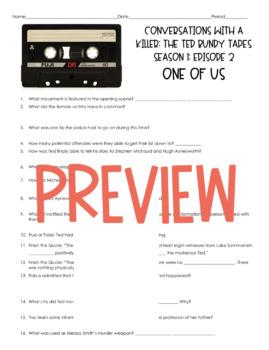 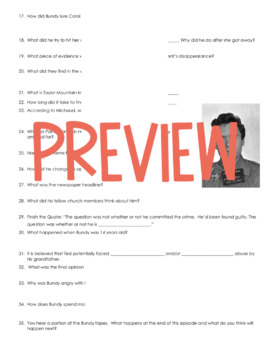 NETFLIX's Conversations with a Killer: The Ted Bundy Tapes, was released on the 30th anniversary of his execution. Ted Bundy is one of the most notorious serial killers. He was also not what people thought of when they thought of a murderer. As this episode suggests, many thought he was "one of us" and was a regular guy. Episode 2: One of Us, focuses on a Ted Bundy and his next string of murders that occur in Utah and Colorado. It does look into some of the early crimes committed in Washington with the disappearance of several young women and build off of what it discussed in Episode 1. One psychologist also shares about some pieces from Bundy's childhood that shaped who he was as an adult. This lesson would be great in Psychology, Criminology, Law & Justice, or helpful for last minute sub plans. It could also be a great addition when discussing the Nature v. Nurture debate.

There are 35 questions on this worksheet and an answer key has been provided for your convenience. The runtime is 57 minutes and it is rated TV-MA on Netflix. WARNING: It discusses his issue with pornography as a young boy and it does show a couple of nude pictures and suggestive pictures in rapid order. You could easily skip this part in the film. I would recommend viewing before showing to students.

Conversations with a Killer: The Ted Bundy Tapes- Be sure to check out the other episodes available in my store!

Episode 3: Not My Turn to Watch Him

BUNDLE: Conversations with a Killer- All 4 episodes for $5.99! Save 40% off the price of buying them all individually!

Total Pages
3 pages
Answer Key
Included
Teaching Duration
1 hour
Report this Resource to TpT
Reported resources will be reviewed by our team. Report this resource to let us know if this resource violates TpT’s content guidelines.