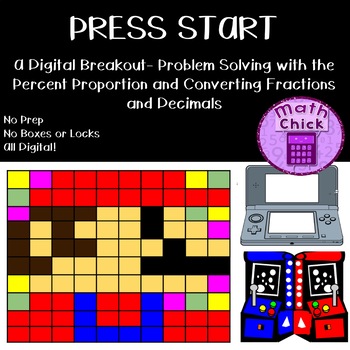 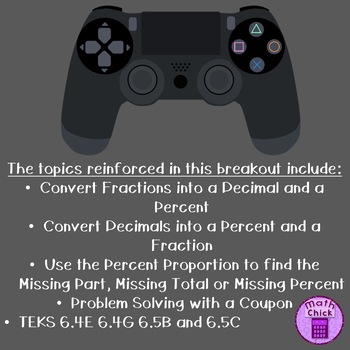 It’s time to press start on a highly engaging converting fractions, decimals, and percents activity. Amp up the engagement in your classroom with this Press Start Digital Escape Game! This fun digital activity provides a unique and engaging alternative to traditional learning environments while reinforcing fractions, decimals, and working with a percent. Escape games shift ownership of learning from the teacher to the student and require critical thinking, collaboration, creativity, and communication skills.

A digital escape requires no preparation of materials, no time spent setting up, and no purchase of a Breakout EDU kit. This activity is perfect for distance learning, a hybrid classroom, technology integration, review, sub plans, a fun partner activity, independent practice and so much more!

To Use This Resource You Will Need To:

The TEKS seen in this Breakout are:

How about 5th grade activities?

Writing Equations Using Variable or Letter for the Unknown Google Classroom 5.4B

Multiply a Whole and a Fraction Interactive Google Classroom Activity TEKS 5.3I

Problem Solving with Graphs and Data TEKS 5.9A 5.9B 5.9C Google Classroom