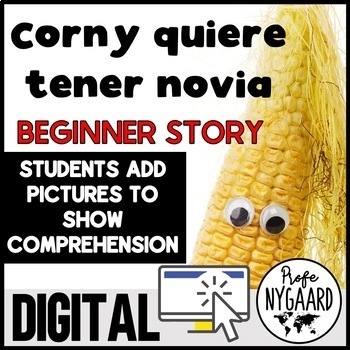 Profe Nygaard
2.1k Followers
Follow
Made for Google Drive™
This resource can be used by students on Google Drive or Google Classroom. To access this resource, you’ll need to allow TpT to add it to your Google Drive. See our FAQ and Privacy Policy for more information.
DescriptionReviews20Q&A1

Use these Google Slides to assign students directly in Google Classroom or Schoology. The slides only contain the text so students must insert pictures one each slide to show their comprehension.

My students had a lot of fun with this and some of their picture slides were hilarious!

This would work well as a sub-plan.

This is a silly story about a corn cob that wants a girlfriend like Beyonce. Corny lives in a field in Ohio and doesn't have a cell phone or car but he has four dollars. He meets a scarecrow, a police officer, and an old man. He goes to Starbucks but doesn't find a girlfriend there. He finds a girl on farmersonly.com. They arrange for a meeting but unfortunately,

it's too hot in Iowa and Corny turns into popcorn while waiting so when she arrives she doesn't recognize him!

This took my students the entire class period and most were still not done so they finished it as homework.

This product is EDITABLE because it is in Google Slides format.

Total Pages
38 pages
Answer Key
Does not apply
Teaching Duration
90 minutes
Report this Resource to TpT
Reported resources will be reviewed by our team. Report this resource to let us know if this resource violates TpT’s content guidelines.