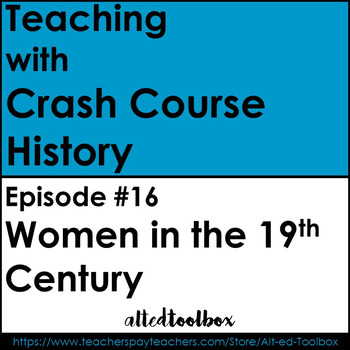 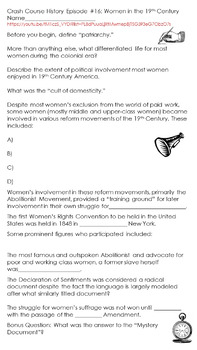 This worksheet is intended to be used with Crash Course History Episode #16: Women in the 19th Century.

John Green finally gets around to talking about some women's history. In the 19th Century, the United States was changing rapidly, as we noted in the recent Market Revolution and Reform Movements episodes. Things were also in a state of flux for women. The reform movements, which were in large part driven by women, gave these self-same women the idea that they could work on their own behalf, and radically improve the state of their own lives. So, while these women were working on prison reform, education reform, and abolition, they also started talking about equal rights, universal suffrage, temperance, and fair pay. Women like Susan B. Anthony, Carry Nation, Elizabeth Cady Stanton, the Grimkés, and Lucretia Mott strove tirelessly to improve the lot of American women, and it worked, eventually. John will teach you about the Christian Temperance Union, the Seneca Falls Convention, the Declaration of Sentiments, and a whole bunch of other stuff that made life better for women.

Total Pages
2 pages
Answer Key
Included
Teaching Duration
30 minutes
Report this Resource to TpT
Reported resources will be reviewed by our team. Report this resource to let us know if this resource violates TpT’s content guidelines.