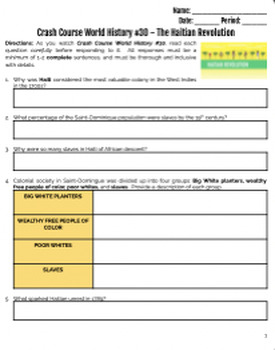 In which John Green teaches you about the American Revolution and the American Revolutionary War, which it turns out were two different things. John goes over the issues and events that precipitated rebellion in Britain's American colonies, and he also explores the ideas that laid the groundwork for the new American democracy. Find out how the tax bill from the Seven Years War fomented an uprising, how the Enlightenment influenced the Founding Fathers, and who were the winners and losers in this conflict.(hint: many of the people living in the Colonies ended up losers) The Revolution purportedly brought freedom and equality to the Thirteen Colonies, but they weren't equally distributed. Also, you'll learn about America's love affair with commemorative ceramics and what happens when rich white guys take the reins from reins white guys, and put together a society of, by, and for rich white guys.

In which John Green examines the French Revolution, and gets into how and why it differed from the American Revolution. Was it the serial authoritarian regimes? The guillotine? The Reign of Terror? All of this and more contributed to the French Revolution not being quite as revolutionary as it could have been. France endured multiple constitutions, the heads of heads of state literally rolled, and then they ended up with a megalomaniacal little emperor by the name of Napoleon. But how did all of this change the world, and how did it lead to other, more successful revolutions around the world? Watch this video and find out. Spoiler alert: Marie Antoinette never said, "Let them eat cake." Sorry.

Ideas like liberty, freedom, and self-determination were hot stuff in the late 18th century, as evidenced by our recent revolutionary videos. Although freedom was breaking out all over, many of the societies that were touting these ideas relied on slave labor. Few places in the world relied so heavily on slave labor as Saint-Domingue, France's most profitable colony. Slaves made up nearly 90% of Saint-Domingue's population, and in 1789 they couldn't help but hear about the revolution underway in France. All the talk of liberty, equality, and fraternity sounds pretty good to a person in bondage, and so the slaves rebelled. This led to not one but two revolutions, and ended up with France, the rebels, Britain, and Spain all fighting in the territory. Spoiler alert: the slaves won. So how did the slaves of what would become Haiti throw off the yoke of one of the world's great empires? John Green tells how they did it, and what it has meant in Haiti and in the rest of the world.

In which John Green talks about the many revolutions of Latin America in the 19th century. At the beginning of the 1800s, Latin America was firmly under the control of Spain and Portugal. The revolutionary zeal that had recently created the United States and had taken off Louis XVI's head in France arrived in South America, and a racially diverse group of people who felt more South American than European took over. John covers the soft revolution of Brazil, in which Prince Pedro boldly seized power from his father, but promised to give it back if King João ever returned to Brazil. He also covers the decidedly more violent revolutions in Mexico, Venezuela, and Argentina. Watch the video to see Simón Bolívar's dream of a United South America crushed, even as he manages to liberate a bunch of countries and get two currencies and about a thousand schools and parks named after him.

In which John Green wraps up revolutions month with what is arguably the most revolutionary of modern revolutions, the Industrial Revolution. While very few leaders were beheaded in the course of this one, it changed the lives of more people more dramatically than any of the political revolutions we've discussed. So, why did the Industrial Revolution happen around 1750 in the United Kingdom? Coal. Easily accessible coal, it turns out. All this, plus you'll finally learn the difference between James Watt and Thomas Newcomen, and will never again be caught telling people that your blender has a 900 Newcomen motor.

In 1789, the French Monarchy's habit of supporting democratic popular revolutions in North America backfired. Today, we're talking about the French Revolution. Across the world, people were rising up to throw off monarchies, and Louis didn't see the writing on the wall until it was too late. Today we'll talk about how the French Revolution unfolded, and what (if anything) was really accomplished. You'll learn about stuff like the National Assembly, the Tennis Court Oath, the Declaration of the Rights of Man and the Citizen, the guillotine, Robespierre, and a bunch of other kind of unbelievable details.