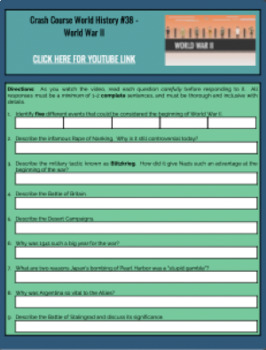 In which John Green teaches you about World War II, aka The Great Patriotic War, aka The Big One. So how did this war happen? And what does it mean? We've all learned the facts about World War II many times over, thanks to repeated classroom coverage, the History channel, and your grandfather (or maybe great-grandfather) showing you that Nazi bayonet he used to keep in his sock drawer and telling you a bunch of age-inappropriate stories about his harrowing war experiences. So, why did the Axis powers think forceful expansion was a good idea? (they were hungry). So why did this thing shake out in favor of the Allies? HInt: it has to do with the fact that it was a world war. Germany and Japan made some pretty serious strategic errors, such as invading Russia and attacking the United States, and those errors meant that pretty much the whole world was against them. So, find out how this worldwide alliance came together to stop the Axis expansion. All this, plus Canada finally gets the respectful treatment it deserves. Oh, and a warning: there are a few graphic images in this episode. Sensitive viewers may want to use caution, especially around the 9:15 mark.

In which John Green teaches you about World War II, and some of the causes behind the war. In a lot of ways, WWII was about resources, and especially about food. The expansionist aggression of both Germany and Japan were in a lot of ways about resources. There were other reasons, to be sure, but the idea that the Axis needed more food can't be ignored.

In which John Green teaches you about World War II, a subject so big, it takes up two episodes. This week, John will teach you how the United States got into the war, and just how involved America was before Congress actually declared war. John will actually talk a little about the military tactics involved, and he'll get into some of the weaponry involved, specifically the huge amount of aerial bombing that characterized the war, and the atomic bombs that ended the war in the Pacific.

In which John Green teaches you about World War 2, as it was lived on the home front. You'll learn about how the war changed the country as a whole, and changed how Americans thought about their country. John talks about the government control of war production, and how the war probably helped to end the Great Depression. A broader implementation of the income tax, the growth of large corporations, and the development of the West Coast as a manufacturing center were also results of the war. The war positivelychanged the roles of women and African Americans, but it was pretty terrible for the Japanese Americans who were interred in camps. In short, World War II changed America's role in the world, changed American life at home, and eventually spawned the History Channel.

Only a couple of decades after the end of the First World War--which was supposed to be the War that Ended All Wars--another, bigger, farther-flung, more destructive, and deadlier war began. Today, you'll learn about how the war in Europe progressed, from the Molotov-Ribbentrop pact and the invasion of Poland, to the Western and Eastern fronts, to VE Day and the atom bombs used in Japan.

Our look at World War II continues with a closer examination of just how the war impacted soldiers in the field, and the people at home. For many of the combatants, the homefront and the warfront were one and the same. The war disrupted life for millions upon millions of people. You'll learn about the different experiences of the populations of various combatant states.