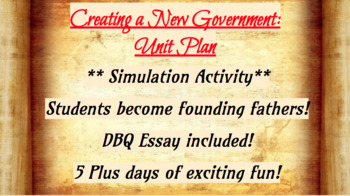 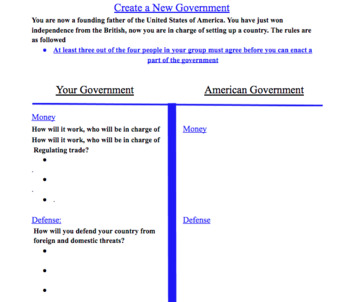 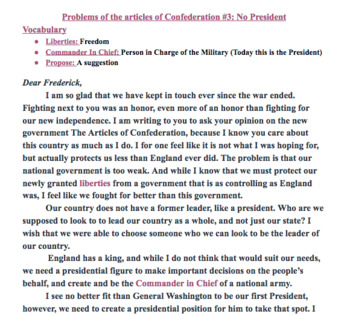 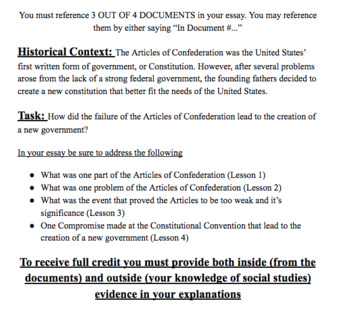 ***This Unit is a simulation activity where students will act as government representatives who establish the Articles of Confederation and the U.S. Constitution***

Day One Creating a Government: Students will create their own government in groups of three-four with scaffolded help and compare their government to the Articles of Confederation

Day Two Problems under the Articles of Confederation: Students will read one of three letters (differentiated with vocabulary keys included) to collaborate as to why the Articles were a failure, and how they are founding fathers can change it. Homework included

Day Three Responses to the Articles: Students will compare the Northwest Ordinance and the Ordinance of 1783 via a venn diagram, and will assess as founding fathers how to respond to various rebellions (Shay's Rebellion) that are taking place in their nation. Homework Included

Day Four and Five Constitutional Convention Simulation: Students will learn about the issues that divided large and small states under the articles. Later, students will be assigned a state to represent and using census data from their state, will determine how their state feels about certain issues under the Articles (slaves counting towards representation, Virginia Plan v.s New Jersey Plan, etc) to introduce the compromises that took place under the Articles and the road to the Constitution.

DBQ Essay: How did the Articles of Confederation lead to the creation of a new government?

Log in to see state-specific standards (only available in the US).
CCSSRH.6-8.9
Analyze the relationship between a primary and secondary source on the same topic.
CCSSRH.6-8.8
Distinguish among fact, opinion, and reasoned judgment in a text.
CCSSRH.6-8.2
Determine the central ideas or information of a primary or secondary source; provide an accurate summary of the source distinct from prior knowledge or opinions.
CCSSRH.6-8.1
Cite specific textual evidence to support analysis of primary and secondary sources.
CCSSCCRA.L.4
Determine or clarify the meaning of unknown and multiple-meaning words and phrases by using context clues, analyzing meaningful word parts, and consulting general and specialized reference materials, as appropriate.
Total Pages
32 pages
Answer Key
N/A
Teaching Duration
1 Week
Report this Resource to TpT
Reported resources will be reviewed by our team. Report this resource to let us know if this resource violates TpT’s content guidelines.