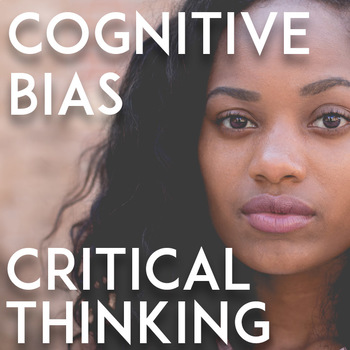 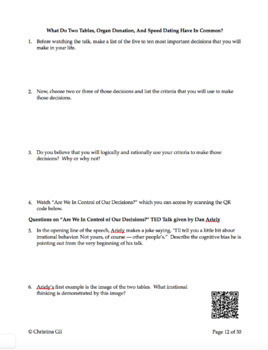 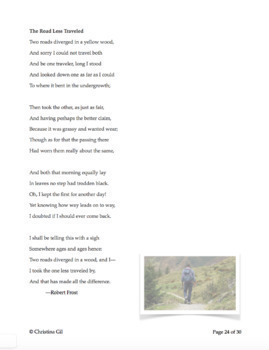 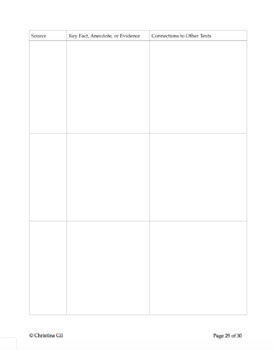 Tired of students who are afraid to think for themselves?

If your goal is to open your students’ minds, to get them to think critically, to help them become more receptive to new ideas, or to show them the importance of examining the evidence before jumping to conclusions, you’ll need this resource.

These informative and engaging lessons on cognitive bias will challenge your students to consider fascinating questions about the way that the human brain works.

Students start off with a fun quiz to “catch” them in one of the common cognitive biases. After that, they’ll move on to two different entertaining videos, an informative and challenging non-fiction passage, and a close reading of a poem that they’ll see in a totally new light.

You'll have so much fun exploring the complicated human brain and helping your students to question their own assumptions and beliefs.

This mini unit would be a great way to start an ELA unit on The Hunger Games, Animal Farm, 1984, Slaughterhouse Five, Brave New World, The Handmaiden’s Tale, Night, The Things They Carried, or a unit on dystopian novels, war or propaganda, or literature that deals with why people are lead to believe dangerous truths.

This unit would be a great way to start a science unit that might be controversial to some students, such as a unit on climate change, evolution, or vaccines. Of course, it would also make a great addition to any social studies class.

It would be a great way to start a history unit on any period in time when people were lead to make dangerous and irrational decisions, when they were swayed by propaganda, or when seemingly rational people made irrational choices. It could even be used to look at some the baffling problems facing our country today.

Total Pages
30 pages
Answer Key
Included
Teaching Duration
4 days
Report this Resource to TpT
Reported resources will be reviewed by our team. Report this resource to let us know if this resource violates TpT’s content guidelines.

Log in
to see state-specific standards (only available in the US).
CCSSSL.11-12.1
Initiate and participate effectively in a range of collaborative discussions (one-on-one, in groups, and teacher-led) with diverse partners on grades 11–12 topics, texts, and issues, building on others’ ideas and expressing their own clearly and persuasively.
CCSSW.11-12.10
Write routinely over extended time frames (time for research, reflection, and revision) and shorter time frames (a single sitting or a day or two) for a range of tasks, purposes, and audiences.
CCSSW.11-12.2
Write informative/explanatory texts to examine and convey complex ideas, concepts, and information clearly and accurately through the effective selection, organization, and analysis of content.
CCSSRI.11-12.10
By the end of grade 11, read and comprehend literary nonfiction in the grades 11-CCR text complexity band proficiently, with scaffolding as needed at the high end of the range.By the end of grade 12, read and comprehend literary nonfiction at the high end of the grades 11-CCR text complexity band independently and proficiently.
CCSSRI.11-12.7
Integrate and evaluate multiple sources of information presented in different media or formats (e.g., visually, quantitatively) as well as in words in order to address a question or solve a problem.