DESERTS of the World Mapping Worksheet 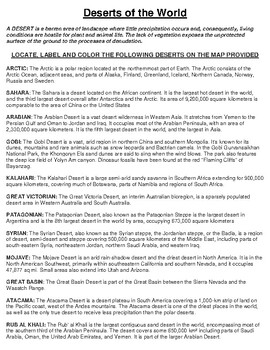 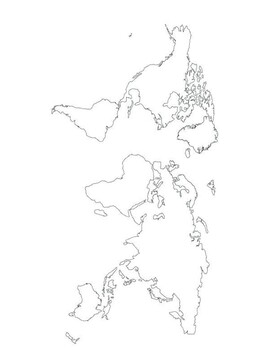 Students research, locate and label the following DESERTS on a world map

ARCTIC: The Arctic is a polar region located at the northernmost part of Earth. The Arctic consists of the Arctic Ocean, adjacent seas, and parts of Alaska, Finland, Greenland, Iceland, Northern Canada, Norway, Russia and Sweden.

SAHARA: The Sahara is a desert located on the African continent. It is the largest hot desert in the world, and the third largest desert overall after Antarctica and the Arctic. Its area of 9,200,000 square kilometers is comparable to the area of China or the United States

ARABIAN: The Arabian Desert is a vast desert wilderness in Western Asia. It stretches from Yemen to the Persian Gulf and Oman to Jordan and Iraq. It occupies most of the Arabian Peninsula, with an area of 2,330,000 square kilometers. It is the fifth largest desert in the world, and the largest in Asia.

GOBI: The Gobi Desert is a vast, arid region in northern China and southern Mongolia. It's known for its dunes, mountains and rare animals such as snow leopards and Bactrian camels. In the Gobi Gurvansaikhan National Park, the Khongoryn Els sand dunes are said to sing when the wind blows. The park also features the deep ice field of Yolyn Am canyon. Dinosaur fossils have been found at the red "Flaming Cliffs" of Bayanzag.

KALAHARI: The Kalahari Desert is a large semi-arid sandy savanna in Southern Africa extending for 900,000 square kilometers, covering much of Botswana, parts of Namibia and regions of South Africa.

SYRIAN: The Syrian Desert, also known as the Syrian steppe, the Jordanian steppe, or the Badia, is a region of desert, semi-desert and steppe covering 500,000 square kilometers of the Middle East, including parts of south-eastern Syria, northeastern Jordan, northern Saudi Arabia, and western Iraq.

MOJAVE: The Mojave Desert is an arid rain-shadow desert and the driest desert in North America. It is in the North American Southwest, primarily within southeastern California and southern Nevada, and it occupies 47,877 sq mi. Small areas also extend into Utah and Arizona.

ATACAMA: The Atacama Desert is a desert plateau in South America covering a 1,000-km strip of land on the Pacific coast, west of the Andes mountains. The Atacama desert is one of the driest places in the world, as well as the only true desert to receive less precipitation than the polar deserts.

RUB AL KHALI: The Rub' al Khali is the largest contiguous sand desert in the world, encompassing most of the southern third of the Arabian Peninsula. The desert covers some 650,000 km² including parts of Saudi Arabia, Oman, the United Arab Emirates, and Yemen. It is part of the larger Arabian Desert.